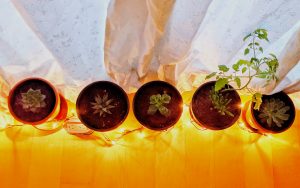 My succulents have grown. When I first repotted them, they barely took up any room, and now I am hoping that by next summer, I will need to repot them once more.

I was supposed to be out of Ottawa by now, but decided to delay as late as possible so that I could travel without being sick (or as close to this as is manageable), and before all of our internal travels were set to begin. Every 24 hours help a little bit more; equally, all of the honey and salt water rinses, which will be my only carry-on liquids. Sorry serums, it’s not personal.

My birthday is in three days.

I may be past the halfway point of living here. As equally as this thought is strange and sometimes terrifying, it is also a little bit welcome and even comforting.

The older I am, the less I like it here. Too often, I feel alien; even with all of the love with which I am surrounded, I still feel alien.

This dunya grates. Most people in it, they grate.

I have been reading every single thing I can find about what is happening to the Kurds in Syria. Humans, too many of us are monsters if given half the chance. And so many amongst us commit crimes in the name of Faith. But monsters is all they are, and always will be.

I have been reading about the rapes.

We are supposed to ask for more time here, so that we can do good and ensure that the next life is full of love, rather than searing in pain. But me, I believe I will be ready to go Home when it’s time. I don’t want to keep seeing how much more awful humans can be. How much more damage we can do to one another. How much hate wo/men carry in their hearts.

I watched Ellen Degenerates’ video, where she protects her tax bracket kin, in order to justify her disgusting behaviour – chummy with American war criminal Bush.

And no, I am no fan of Obama or his wife who declared that there were no ‘scandals’ while her husband was POTUS. Because the civilian death toll under Obama far outdid that under Bush. Let that sink in.

But first, a small reminder from Abu Ghraib, where up to 90% of the prisoners had been misidentified, and therefor innocent (Source: ICRC Report – On the treatment by the coalition forces of prisoners of war and other protected persons by the Geneva Conventions in Iraq during arrest, internment and interrogation, February 2004) –

“…another interrogator “removed her uniform top, and began . . . touching her breasts, rubbing them against the prisoner’s back and commenting on his apparent erection”. When the prisoner spat in her face, “she circled around him so that he could see that she was taking her hand out of her pants. When it became visible, the detainee saw what appeared to be red blood on her hand.” The interrogator then wiped the “blood” on her prisoner’s face. She was not the only female interrogator to use this tactic.” (Source: The Irish Times, 2008,  Why did these women do it?)

And these we only know of because they were documented in photographs, with soldiers smiling next to the men.

We are a truly ugly and sick lot, aren’t we?

Today, I am grateful for:
1. Every additional second I can heal while quietly in The Cloud Cave.
2. Travel insurance.
3. Sleepy-time cough medicine.