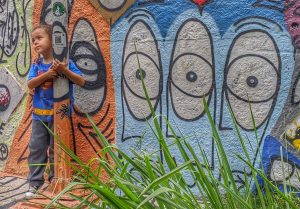 We spent the day winding our way through a terribly fun vintage market in the Pinheiros hood, before I got to ogle the unreal graffiti in the Beco do Batman neighbourhood. I don’t know how I didn’t fall and break a face while looking up at all of the beauty.

Before we arrived there, we had to make our way through one of the wealthiest district – Jardins.

I already mentioned how I have struggled to look certain people in the eye because I feel ashamed of the system we have created, allowing for such wealth inequality. On a few occasions now, I have watched men (ranging in age from 20-something to elderly) move between traffic at a red light. The elderly walk their snacks between cars; the younger men hang them on the sideview mirrors. They run back to the front, and start winding through the cars to collect them before the light turns red. Those who buy, buy; if the seller doesn’t have time to collect all snacks, and even if the light turns green, the cars wait for him to collect his livelihood.

Since my arrival, we have been approached by one beggar.

I imagine it makes it easier to turn a blind eye when you don’t have to in fact turn down the elderly wo/man trying to sell you a snack.

There are 2,064 billionaires in this world. Most of them, and most other shitheads, keep their money off-shore to avoid taxation.

Imma creepin’ Sharia this and say that if we were to tax these humans a simple and nominal 2.25% tax (the Muslim taxation amount), we would amass, per billion, per annum $22,500,000.

We have a number. 2,064. (Source: The Wealth-X Billionaire Report 2019) This means that somewhere, there is a list of names. This means that we can pursue accountability.

Instead, too many of us find greater ease and comfort looking at those such as the ones I describe above and think either they didn’t do enough to lift themselves out of their circumstance, or that they deserves this circumstance.

While others still, they travel in helicopters.

I am in love with Brazil. I want to tear the hearts out of the  systems we have built to protect and keep such few.

Today, I am grateful for:
1. Art. All of it. Even the ugly-to-my-eyes pieces.
2. Excellent movies; yesterday N&B introduced me to City of God, and today I introduced them to Beast of No Nation.
3. That I was very consciously and seriously raised to not want to be one of the people who flies in helicopters; rather, one who believes that her Heaven is in different clouds.