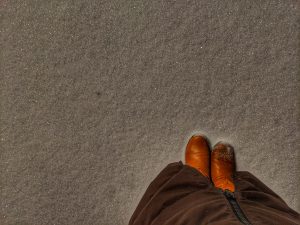 Snow; it’s when the stars fall to the ground.

Have I mentioned that I keep track of how I am ageing? Like, an actual list? It’s how I learn to love and appreciate the different stages of being alive (for so damned long, alhamduliLah). This year’s winners? Fine new grey hairs around my temples, and a change in the skin around my eyes. Also, more freckles that are in fact sun damage. “YAY.”

I had originally planned to do a one post round-up of The Sabbatical lessons, but have instead decided to post the lessons randomly throughout this last month. This is the first installment.

Today, the lesson of choice is: You don’t have to forgive anyone’s bad behaviour in order to heal.

At the beginning of The Sabbatical, I was obsessed with finding a way to forgive the unforgivable. To do this, and as I did while in the relationship, I turned myself inside out to forgive, and once again denied the pain and the wounds of his degenerate behaviour.

I was raised to treat others as I wished to be treated by Allah. Forgive the dummies, so He might have Mercy on me.

Until I remembered that Allah has promised that on the Day of Judgment, He will defer the decision of forgiveness to the one who was wronged and He will never trump the decision made. This signals two things: 1) it is not in fact necessary to forgive (or else Allah would bypass the giving of the choice); and 2) it is not necessarily in our nature to forgive.

Is it better to forgive? I mean, you might argue that it is. But is it necessary? No. It really isn’t an argument you can make.

This latter point is key because all that is decreed in Islam is meant to go with, rather than against, our nature. As a Muslim, I obviously buy into this. And appreciate the implicit understanding that some things are in fact unforgivable.

Theology aside, I was socialized and conditioned to believe that if I don’t forgive, then this necessarily means that I must carry a weight. Until I realized that I question almost every single thing I am told to take for granted and as ‘common sense’, and landed on: WAIT LET’S TEST THIS THEORY. So test it I did. More on this in a moment…

Now. Because I love my deen more than anything temporal and worldly, I forgave so that He might forgive me.

I have forgiven everyone in my life. But for one, to whom I made the explicit promise (back in March of this year) that I’d never forgive him. If I am anything, I am a woman of my word.

I am also as transparent as they come, and I will tell you, my dear readers, that I am very much looking forward to facing him, and taking his hasanaats in the next. And truly, honestly, if this taking of his hasanaats is what tips his scales? Well, all I can tell you is that he worked hard to earn this tipping.

Right. Back to my experiment – because we are socialized to believe that not forgiving somehow means carrying some kind of a weight, I needed to test the theory before I could believe and really get behind it. What would happen if I chose not to forgive?

What happened? My heart got lighter. It was wild.

The moment I decided that I would not forgive was when the weight lifted. I realized immediately that the heaviness had not been rooted in my inability to forgive, but rather in the struggle to forgive, because that was a fight against myself. In order to forgive, I had to suffocate the part of me that had been harmed. Choosing not to suffocate her is what finally lifted me from the fight.

Distilled, it simply means that sometimes, the only peace to be found is in the refusal to forgive. In other words, it is holding true to the fact that you will always hold a particular someone (or more) accountable for their bad behaviour. Not letting them off the hook is what feels right, because (for the people in the back) sometimes, some things are simply unforgivable.

Look carefully to where your heart finds its rest; place it there as a kindness to yourself, and allow others the room to take responsibility for the cesspools of their own making. Plain and simple.

Today, I am grateful for:
1. Peace. I am sorry we send you to war. I remember.
2. Turtlenecks. Thanks for making me laugh.
3. My baristas. I don’t know where I would snort my caffeine otherwise.