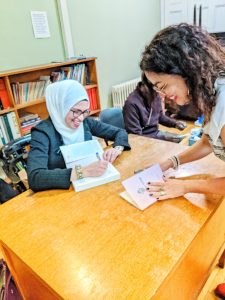 Author of Ayesha at Last, this stunner is Uzma Jalaluddin. I had heard rumblings of this book, but being as out of touch as I have been during The Sabbatical, I didn’t know as much as I should have. Until Ashley asked me if I would join her for Books and Biryani.

I am ALWAYS here for hijabis who are representing us in this time of escalating Islamophobia. Women are, no matter our faith, a target. Women of colour are at greater threat. Throw on a crown of silk, and they are the easiest target for Nazis.

And we are surrounded by Nazis, spare me the delusion that Canada is free of them. We are better, but we can do and we need to do Better with a capital ‘b’.

I am a harsh critic. As a hijabi, Uzma is speaking for my deen whether she wants to or not, and so I am paying extra attention; I was fixated on her every word. Though I wear my Islam with great and loud pride, if you don’t actually know me, you won’t know I am Muslim. As I mentioned lightly when I asked my question, the hijab is a game-changer, placing women in a particular place of responsibility (in which I am not placed, though I will place my body between a hijabi and anyone threatening her any day of the week).

I had brought a copy of rose-water syrup which I was so shy to give her until 1) I saw her amazing outfit, full of colour and vibrancy (she is straight-up gorgeous, bismilLaah w mashAllah), and 2) she kept bringing it on stage. So much bringing, I nearly threw rose-water at her head (ultimately deciding not to, because paper cuts).

As soon as she came off of stage, I accosted her in a frenzy of fan-girling, and told her I had a gift for her. She loved the title OF COURSE SHE DID THIS IS LIKE A HOME-COMING FOR ALL NORTH AFRICAN, MIDDLE EASTERN, AND EAST ASIAN PALETTES. She even asked me to sign it for her and she gave me a hug. I was over the moon, because I am a proper nerd. I am still so excited by this. I do hope she likes my very small collection ♥️

Today’s photo was taken a little later, when we were both signing books for one another. Hers, for me; mine, for her. What a trip.

Today, I am grateful for:
1. Allies. Ashley is one such woman, and I don’t actually know if they are aware of how critical they are to our worlds.
2. Ashley as a human, not as an ally. Chatting at Whalesbone after the show, we lost track of time and left one another at 11.30pm. Excellent people, she is this one.
3. Not falling on our asses while walking in this insanely too early squall.