Apparently, the wiggling index fingers by the temples is not the Longhorns secret handshake. I won’t share with you what the actual secret handshake is because it is unimaginative and boring. Actually, I’m lying – I will share it when writing about the massively unbelievable theatrical production that is College Football (angry headsets and all).

I have, however, discovered the Secret American Handshake, that is code for all things stupid and / or inexplicable. It is “I’m Canadian”, words golden to my ears and interestingly explicative of most anything an American doesn’t understand. 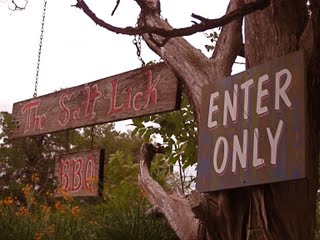 Night before last, I ate 1/4 pound of Texas bar-b-que beef brisket. I also ordered, though didn’t eat, 1/2 pound of smoked turkey. I had no idea what either of the portions was going to look like, as I usually order by the plate rather than the weight (“I’m Canadian”) and so was pleasantly surprised to discover that one could eat 1/2 pound of meat rather easily and without a feeling of gorging. Actually, I would opt for something in between 1/4 and 1/2 pound, but seeing as how I am no longer in high school, I honestly don’t know what that fraction would look like. I tried to Google, only stopped because Google was making me feel exceptionally stupid.

I also ate pickles, potato salad, and white doughy bread because Texans have yet to discover the toaster. And God said, let there be bread! But no toaster oven! Thou shalt choke on the doughy parts and wear stupid pants other parts of thy nation shall mock: Wrangler jeans! And the angel doves sang… 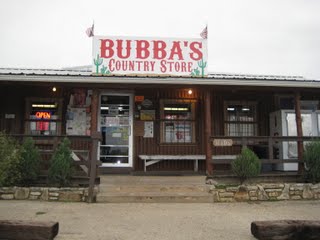 At the end of the evening, when I asked for any kind of flavored tea, I was told – rather gently – that they only serve ice tea at Salt Licks. Following up on that reality, the waitress asked me if I know where she could find her some ‘nettle’ tea. Refraining from asking if nettle was a sort of bug, I instead merely pretended to live here…and then eventually ended up saying “I’m Canadian” when I didn’t have an answer.

We went to J. Black’s, a joint owned by the same man who owns my favorite spot in Austin – Shakespeare’s Pub (before the 22nd hour of the day, when all of the dummies come out to play). J. Black’s was quite a treat as it is the sort of place where most of the men wear fedoras and p’leather, and the women wear tans and breasts.

My favorite conversation overhead was between Moron Tom and Moron Bitty: “I can’t marry you.” Moron Bitty giggled. Moron Tom knew he was getting a piece of that fake-breasted, over-tanned, over-made up ass. And the angel doves sang… 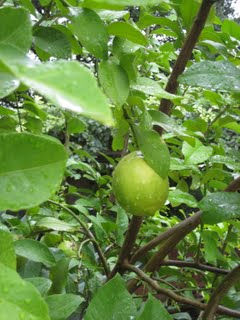 In addition, a few choice quotes from the evening, none of which I will attribute to anyone:

“See the girl in the green bubble skirt? I wanna take a pin, stick it in her bum and see what happens.”
“Is he Asian? Or Mexican? He’s Asiacan! Nice.”
“To your right. Donatella Versace and her mini-mi.”
“To your right, again. Do you think she put that on and looked in the mirror and imagined the thought: YES. Maybe she started drinking before she got dressed?”
“That’s p’leather. WOW. And his jeans have massive white stitching on them.”
“They’re from Dallas.”
“She’s eating garlic riddled asparagus at the bar. I know what you’re pee’s gonna smell like.”
“Look – It’s the Crypt Keeper. She totally picked up Tim McGraw.”
“O! Fedora alert – and…it’s on a little to the left. HEY! IT HAS A FRIEND in a crocheted knit hat. Wonder if his mom made that for him to keep him warm?”
“That guy keeps flashing his rolex. And his very bright yellow tie.”

J. Black’s is the place where people go to see and be seen. I was in a sweater and jeans and was getting stared at because I stuck out like a sore thumb…”Where are her breasts? Dude. I’m totally confused. Is she a guy?”…nah man, I’m Canadian… It’s where men pull up on their scooters and drink martinis and think that’s acceptable in public. It is where the Metrosexual race hangs, damn them each and every one of them who plucks his brows. 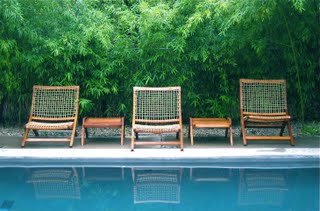 Desperately, I was willing a boy, any boy, to walk in wearing a clean t-shirt and a pair of normal jeans. Any boy who would just order a beer and drink it from the bottle. A boy without enough gel in his hair to cobble an entire brick wall. But nothin’…and so my evening ended in dreams of a boy named Cracker, riding a Hog and slapping down very pretty Metrosexuals as he rode off into the sunset with a beer bottle peeking out of his jacket’s pocket. He was Canadian. And the angel doves sang…