This is part two to Longhorns crush Denver & a Canuck learns the secret handshake & remains clueless re Football, unless associated with Taylor Kitsch & COACH ERIC TAYLOR. 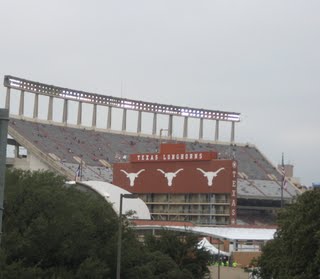 After washing my banana down with the last drops of my citrus honey tea, I walked into the stadium which is bigger than the official Senators stadium here in Ottawa. I was stunned, partly due to the banana headache and also due to the sheer magnitude of this place.

One hundred thousand people and I was the third one to walk into the stadium. Fun Fact: University of Austin has an approximate student body of 50,000. Of these, 49,881 are Asian, whereas the other 119 – a mix of boys named Vondrell and Patrick – sit on the Longhorns’ football roster. (I did that without a calculator.) 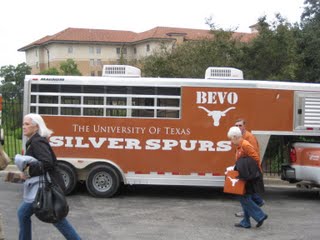 Taking the half an hour stroll to my seat, I walked past the Longhorns’ mascot, a bull (or something similar to) named Bevo. I was too scared to go near it and so don’t know if it was in fact inside of its car. Surely this thing had bananas? 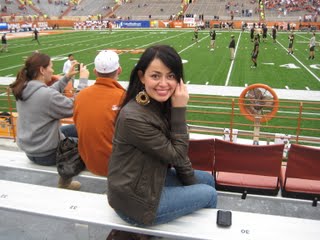 I arrived at my seat and noticed it was bare, whereas some other seats had these awesome and comfortable looking pumpkin orange leather cushions with backs. Naturally, I grappled with one in an effort to pull it over to my seat because I thought ‘First come, first served’. While struggling to move the comfy bum-cushion, I was told – rather gently – that these seats one had to purchase and so, in essence, what I was trying to do was steal someone else’s seat.

I could have been shot for doing this, because that’s what they do in Texas.

Anyway, the old man who told me was nice enough to take my picture, as a memento of this near-thieving occasion. I was trying to take one of the seats to my right, as you can see in the picture.

First the banana, and then a cold ass. Wicked. 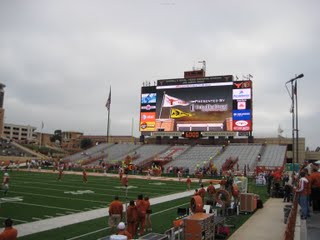 But you know what’s more important than my cold ass? The GODZILLATRON. Texans are very creative and imaginative when it comes to the naming of things – like their children when they call them Colt, Cody, or my favorite? Hunter, because Texas is The Days of Our Lives and everyone within lives their realities in technicolor. And for those who don’t? There’s capital punishment.

Luckily, my ass didn’t stay cold for very long, because hello, college boys, all athletic and in tight clothes and without sleeves. This is Team Colorado or Denver – I’m actually not sure which and that’s how much attention I was paying. They are very smart, as you can see by their chosen outfits. GO SLEEVELESS! 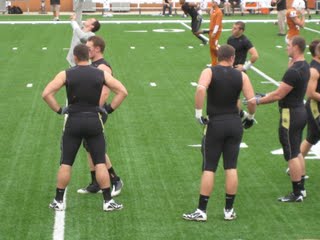 Giddy and smiley I remembered I could take video. Notice what happens to my sense of focus at around the 25 second mark.

I was also quite nearly rendered deaf by the sound of techno music being blasted through the stadium. I dunno, but it must be something specific to Texas because the Denver boys were making fun of the music and dancing as though at a rave. (This very made me nearly scream TEAM DENVER! because they were so funny.)

But enough about the losing team, Denver, and instead, let’s next take a peek at the Longhorns warming up. (I almost video’d them praying before they crushed Denver, but thought it would just serve as another reason for me to have my ass shot off by a Texan.)

The Set-Up: Key Players
Before ending this spazy commentary, I would like to introduce you to all key players who make the Longhorns the team that they are today.

Jesus, may peace and blessings be upon him. (As a Muslimah, I do not concur with the sandy-blonde and fair skinned fella many y’all pray to and so there shall be no image of this man on this site.)

Mack Brown, the legend himself as he appears on the GODZILLATRON: 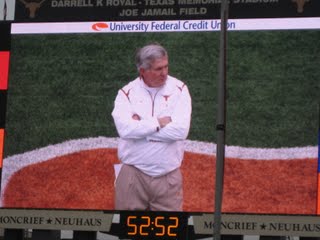 And then later in his angry headset: (COACH ERIC TAYLOR wears it better. HI!) 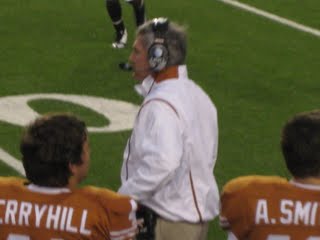 Other important people milling about. Mostly, they run ahead of the team as the team gets on the field and they yell and scream and cheer them on. They say things like JESUS LOVES YOU! and WIN THIS FOR JESUS!: 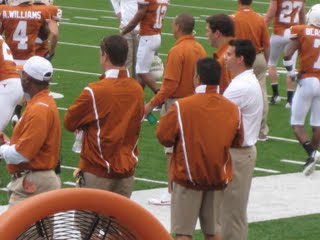 There was also this guy, who was just sort of an interesting guy because he didn’t yell or scream, but he did look like he belonged there and could crush Denver all by himself. Also, he’s very attractive, yes? 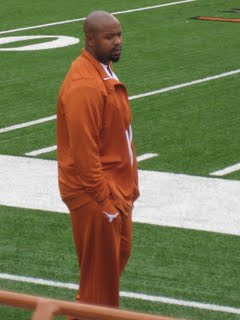 Another Coach who, suspiciously, looks very much like Mack Brown and has the same skin coloring as Jesus (coincidence or conspiracy? You decide.): 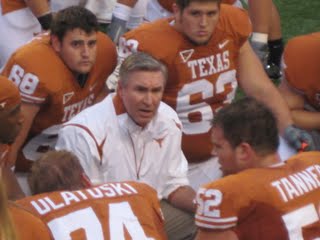 A supremely old dude who clearly refuses to use either a cane or a walker. I took his photo because he is so very old…and between you and I, I wonder if he is still living: 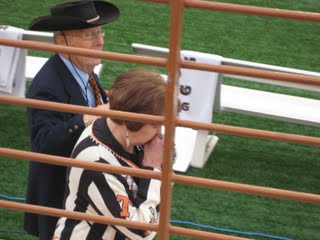 One of the ESPN cameramen who bring you your pigskin and who stands on a zippy platform that…zips…at very high and aggressive speed: 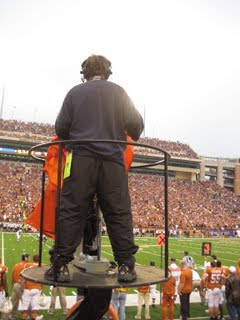 And two of the three young men who likely get the most action in the State of Texas and who carry the weight of the world on their shoulders…QB1 Colt McCoy, who didn’t impress me much: 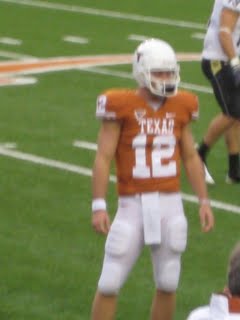 & WR Jordan Shipley, who impressed me to the point of jaw-dropping hurrah-ing (remember this kid’s name because very soon, he will become among the elite of the NFL): 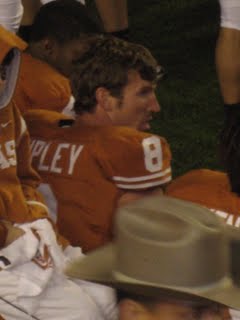 Missing from these pictures is the image of the third young man – RB Vondrell McGee – who works with the rest of the team to kick the shit out of every other football team in the Big 12. Vondrell also impressed me to the point of jaw dropping hurrah-ing, and I expect that he too will soon enough become among the elite of the NFL, and his is a name you should remember.