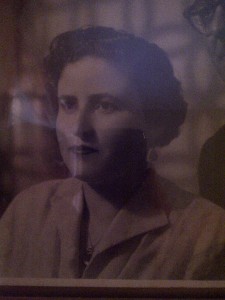 When my matrilineal grandmother – teeta – died, found in her night table drawer was the most important photograph she’d carried with her throughout her life.

Teeta came from what remains one of the oldest and richest families in Jerusalem. My great grandfather was a man I never met, but about whom I still hear many great stories, both in terms of his incredible business mind and generosity to his children and community.

Apart from owning much of the farmland in Jerusalem, my great grandfather also owned much of the downtown core where the family home still stands, now a famous hotel, along with 56 shops remaining, both of which are on the same street as that of The Church of The Holy Sepulchre. Weekends and summers were spent in Ashkelon, once known by its Arabic name: Al Majdal, where teeta swam every morning in the pool surrounded by their orange groves, and rode every evening as she was a trained equestrian.

My great grandfather was a very pious man and when he died, he wanted to make certain the following two things happened: (1) That his children worked hard to ensure their own children were well taken care of; and, (2) That the community would benefit from his riches. For these reasons, his will indicated that for the duration of the lives of his children, they would receive the rental fees from the shops in the Old City, as well as any money generated by their farm lands. When the last of his children die, all of this money was to be funneled directly into the social welfare system for the needy (specifically: for orphans).

Although he spoiled his children, there was a limit to that grace and he taught them well that obligation and responsibility began with one’s family, and spread to the community.

It was a lone and particular photograph of teeta and Saa’da – meaning ‘happiness’ – which was found in her night table after her death. Saa’da, an Arabian horse, was gifted to my grandmother by her father.

A black and white picture of my 12 year old teeta with blond hair, fair skin and hazel eyes. She wore a white dress, white socks and white shoes to match the white horse, perfectly groomed they both stood. Saa’da was sideways facing, looking at my grandmother, who was staring directly into the camera, filled with mischief, happiness, pride, and a million secrets ready to burst out of her as soon as the picture was taken. The energy of her leapt out of the photograph, and one couldn’t help laugh – not just smile, but actually laugh – when they saw the beauty of her youth, which is in so many ways, one of the purest of art forms gifted us by God.

When I was younger, I didn’t much pay attention to the relationship between teeta and seedo until the summer she had to go to the hospital. Seedo hardly ate, hardly slept, would spend his entire day next to her in the hospital – and when she came home, I remember standing at the top of the stairs as he held her hand and gently and patiently walked up with her, half-way stopping and bending his head to kiss her hand and tell her that the house had been filled with darkness in her absence. After 50 years of marriage and seven children, they still liked one another.

As deeply as teeta loved her life with seedo and her children, she would occasionally tell me about Saa’da, and about the freedom of riding her. There were no rules for her while she was with Saa’da, neither obligation, nor consequence in the endless hours she’d spent with her.

Teeta had very strong opinions and was a force to be reckoned with when she wanted something; anything she pursued, she did it with justice and not a shred of selfishness. She ran her house with equal amounts of iron and love and her children and husband worshiped her for this. Being the first grandchild, I always remained a novelty and had access to secrets and stories the others did not.

She was a free spirit, teeta, this being so obvious in that photograph with Saa’da. This spirit was dulled and fragmented by the hardship of war and occupation, that wouldn’t allow her to visit her childhood home in Ashkelon from 1948 – 1967. All of the land we still own, but the farmland is no longer workable as when Israel became, they placed a ban on the watering of farmland and so my family’s orange groves died except for the few trees that stood beside the swimming pool. These same trees still stand today, but the orange groves have never rejuvenated.

Access to water, when manipulated accordingly, is more deadly than a bullet.

More importantly was that teeta’s own brother was murdered by the Israeli Defense Forces in Khan Younis, after the nationalization of the Suez Canal. Awakened and pulled from his bed, alongside all of the men in the neighborhood, my great uncle and teeta’s brother in law were among the first to be lined up against a wall and shot dead because they were young Palestinian men and that made them a danger; pre-emptive strike the essence to the actions of the deadly bully that is the State of Israel.

Later, she would have to endure the imprisonment of her husband for nine months, as he was deemed a political threat. Worse still was that her youngest boy would be taken to jail for being a part of a protest and while in jail, beaten so badly that he walked out a man with epilepsy. Today, he would tell you that he is blessed to have walked out at all. These memories are the fabric of my mother’s family; my family.

The smile on teeta’s face as a young woman always told a story far removed from the pictures themselves and the surroundings within. Eternally, there was something happening behind her eyes, always standing out from the rest of the men and women in the pictures. Even though it was until the day she passed that she had a strange mix of innocence, pride, and humbleness, the young woman who once pulled you out of your reality and into her photograph was lost after 1948.

It is only as an adult that I understand the seduction of Saa’da. It is innocence in a distilled form, and freedom in the greatest sense. Not as entirely real as teeta or any of us ever imagine it to be, but when captured in a photograph, the feelings and representations are encapsulated, frozen and melancholy. Where we often lack perfection in every day, we find it in the stories we tell and the pictures we hold tightly.

It was no surprise to her children when they found a photo of Saa’da but none of themselves, as Saa’da was teeta’s lament for freedom in all of its varied forms.

8 thoughts on “A Childhood Photograph”