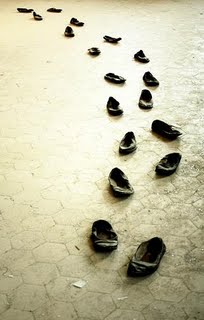 I box twice a week and do my absolute best to make every single class. Short of there being a natural disaster like a flat tire or exhaustion from the donation of blood, I get to class as a nod of respect to my word and to my coaches.

Approximately three weeks back, I was lazy and considered not attending class. Lucky that I went because that evening was the first one in a week that I slept like a (bad ass boxing) baby.

After finishing class, I had to walk through the weight area (hia, fellas!) to reach the change room. The first thing I saw was a man in a wheelchair. I’m not sure of the specifics of his paralysis, but by the atrophy of his arms, I think perhaps that he was once a partial quadriplegic who slowly regained the use of his arms. He was strapping one arm into the weight machine very slowly.

I didn’t catch anything beyond that because I’m not a complete idiot and didn’t wish to stare. Only people who smoke hashish would have stared. Or so I hear. Also, because over the course of the two seconds I used when I glanced at him, something caught in my chest, made its way to my throat and then exploded. I had started to cry.

As I am drenched in sweat by the end of class and usually look as though I forgot to take my clothes off before stepping into the shower, no one could see tears streaming down my face. I quickly bowed my head and ducked into the closest washroom. And I cried. And cried. And kept crying, weeping actually, because I had lost all control.

Boxing for me is a luxury I love to indulge. Truth be told, I don’t think about the healthy dimension it adds to my life – most important for me are that it attacks all of the stress in my life, kicking the shit out of it, and as equally important, vanity. Boxing makes my arms pretty and keeps my bottom fitting neatly into a size six jean.

(And on that note,

You recently plastered across an issue When Size 4 is too big: a curvy model’s struggle to fit in. You, without your carbs, are a sad and unhealthy creature, and I pray that you will soon be force-fed hamburgers, fries and much chocolate cake for your support and spread of such a devastating body image for the sisterhood.

All I could think was how I had nearly not showed up because I had been tired. I had been tired and had considered not attending class, and instead taking my lazy self home and relaxing, while there is this amazing and incredible man who can barely move, who can barely make the smallest of movements, fighting and struggling to do just that, at the gym, busting his ass because he has to. Neither for vanity nor stress, but out of necessity.

He did it.
Repeatedly, he does it.
He makes it to the gym and fights his own body in order to rise above the paralysis one millimetre at a time.

I am still struggling to understand why it affected me as much as it did – even writing this has me near tears. I think, partly it’s because I am beyond expression moved by his strength, which outweighs my own, and also because somehow that little window that opened and let me look into his life was one filled with hope.

Before walking out of the washroom, I knew that I had to start getting to class for a different reason; out of respect for this man’s personal fight, because where he does not have the luxury of lazy, then nor should I.

I try my best not to take for granted anything, but mobility wasn’t something I had noticed before this day.

Now when I move and walk, and I am impatient walking behind the elderly (not to be confused with a slowpoke who still needs to MOVE IT), I check my impatient b!tch self and remember to respect all aspects of what I have, including the luxury to move freely and quickly on my own two feet, Alhamdulilah.