Forgiving who does not offer an apology

October 14, 2011 - Mindful Living - Tagged: apology, forgiving the unforgivable, heart ache, heart break, how do I forgive someone who has not apologized, mercy for your heart, the pain of not forgiving - 8 comments 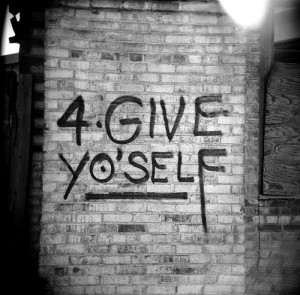 Over the years, I have watched a metamorphisis of those who do not forgive; they are hardened, they are incapable of trust, they are ever licking their wounds because their wounds are filled with poison still.

Reality is, though others may poision our hearts, we must be able to remove the poison where they refuse. And this removal is a choice.

I believe the reason we struggle with forgiveness when someone has not asked for it, is because we are lost in the wrong question. Rather than asking how can I forgive?, we should be asking what is it that I have to forgive?

I know what you’re thinking: that there are some actions which are unforgivable. Your self respect – never here to be confused with pride – kicks the shit out of your stomach every time the thought of forgiveness enters your mind, your rationale rages against the forgiveness, your heart sobs when it even considers it and your entire body is shaken by the mere thought of the acts in question. The consequences of these acts can only be described as what a nuclear bomb would feel like if it were to go off inside of our bodies.

That’s what happened to me; that’s what I was trying to forgive, made uglier by the fact that the individual who committed the act had not acknowledged, had not owned, had not addressed the act in question. And they had been presented with the opportunity to do so. They had been presented with it and yet, they had ignored it. They have not apologised, for whatever excuse they have found to justify their lack of involvement. They believe they are above the apology. And by default, that then makes you unworthy of that apology. And that default, created and sitting somewhere in the back of their mind has absolutely nothing to do with the reality of you.

So then, how do we forgive someone who has not asked for our forgiveness?
Simple.

Disassociate the action from the antagonist.

Forgive the later and dismiss the former because what you are forgiving is their weakness of character rather than their action.

Forgive them because we are not born with this intention to hurt. Afford them that allowance, and nothing more ever again. Because this allowance, this allowance is huge and it should be the last one they ever receive from you.

And then: you must cut them out of your life, completely.

Why? Because it’s the combination of the act and their lack of apology that amounts to their losing the very real privilege of having you in their life in any capacity. That they were given the opportunity to apologize – short of you screaming into their face I NEED YOU TO APOLOGIZE TO ME – is what makes the situation and the environment one to which you can never return. And this is so difficult to face, it is so difficult to swallow, even if you’re the one doing the walking. But you have to do it or you will always be incapable of demanding the respect that you are owed; and if you couldn’t demand that respect after someone detonated a nuclear bomb inside of your body and the individual didn’t have the decency to apologize, then nothing is owed to you. And this is the consequence of your behaviour if you choose to go back to that environment in any capacity.

There is only so much we can take. And there is only so much room we can use to make excuses for others and for ourselves. Because, when they ceased understanding responsibility and accountability and honesty where you were concerned, that was the moment that you no longer became accessible, whether you realised it or not. Because, you are always deserving of an apology and when that apology doesn’t come, then that lack of accessibility to you becomes tangible, and this is where you realise it. It’s in this moment that sheets of ice water come at you and you are forced to face the disrespect that has been levelled at you. It is in this moment that you have to take a stand. And trust me, I have fought this moment and I have tried to argue myself out of this moment, but the ice water has become unbearable and my self respect is beating on my insides.

To those of you who would harbour ill will toward someone after you have made the choice to forgive them, just remember that people aren’t born with the intention to inflict pain. It’s not how we’re built, but rather what we become because of the choices we make.

Harbouring that bitterness only edges you closer to a world of greater pain, resentment and defensives. You build walls because you’re too scared to be hurt again – but you will be hurt again, no matter what you do. It’s a part of life and it’s a part of the pleasure of this life because it’s in these brutal moments of pain and hurt and in the way you overcome them that your character is defined. And here, you have a choice. You either face this life or you run from it. You either challenge it or you succumb to it. You either rule it or you are ruled by it.

Why apologise?
Because, we are beholden to one another and the apology is the respect we show that reality and those we hold dear.

Because, we don’t have the right to belittle the pain of others. And if someone is hurting because of us, then we owe them that apology. We owe it. And only the cowardly, self-involved and arrogant would argue against that reality, and I don’t much like for Ayn Rands in my life. Nor should you.

Most importantly, the apology is what tells us that that individual has taken a moment to place themselves in our shoes. It shows that they care about us enough to think twice about what they have done. And when someone doesn’t do that, then it means they don’t care. And it means you’re not worth the second thought and it speaks volumes about your character if you let someone like that back into your life when they have crossed too many lines to name.

But. But, the only way you can make the above statements without any level of hypocrisy is when you issue your apologies without hesitation, when they are immediate and unadulterated. It is only when you respect the pain of others that you are allowed to make the above demands of them. Note the word ‘respect’, because those who don’t apologize are the people who don’t respect us. (And I will always hold fast to my belief that the level of respect we show others is a direct extension and reflection of how much we respect our selves.)

And that is the way that I have always operated and it is the way I will continue to operate because it is one of the things that makes me a good person. I own my actions. I own my situations, each and every one of them. And I do not shy away from my responsibility to others.

And so: it really is this simple.

Just like the choice to own your shit and apologise for it. You either own and define it, or it owns and defines you. Choose accordingly.

==========
Two final notes to those of you who would not apologize: First, that the only people who are capable of hurting us on the level of a nuclear bomb are people who are close to us. Sometimes, they may be the closest to us – and so you know. You know us and you know that your actions hurt us. You don’t today and you will never in the future have the luxury of saying “I didn’t know.” Second, understand that you are not perfect and your refusal to apologize has a particular stink of arrogance about it. Issuing an apology would be admitting to a mistake and a mistake means that you are less than perfect. And to be flawed is not what a ‘perfect’ person is, but trust in the fact that you were never perfect, that you are currently far far far from it and you will always remain just that far away. You might be well to not confuse confidence with the emotional retardation brought on by too much pride.

8 thoughts on “Forgiving who does not offer an apology”