Updated 8 Dec 2011: I will not be posting the photos on Prolific Immigrant, but rather here at my flickr page. For quick access, I have added a link on the middle side menu titled #365photos because I don’t have an imagination.
———-
Since the mobile became an appendage, we have all been forced to witness our friends hysterical art projects, often as painful to sit through as story time with infants not of our own wombs.

Most notable  is the “365 photos in 365 days” project, where photos 7 – 363 inclusive are of their dinner. Because I am a sheep, I have been considering subjecting you to this same “project” for a while. Baaaaaa.

Due to my crippling sloth manner and terror of commitment, I merely thought about it but never actioned it. Until today.

Behold the first of 365 “inspirational” photos: 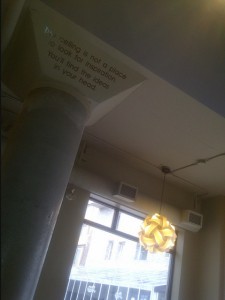 1/365 — Morning coffee shoppe: “The ceiling is not a place to look for inspiration. You’ll find the ideas in your head.”

In the coming 364 days, expect many eye-rolls, some snark, and the very occasional gem.