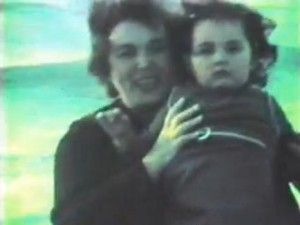 I am the little one, with head shaped like a potato. The beautiful woman is my patrilineal grandmum

Standing by the Mediterranean’s wintered coastline at Gaza, in approximately 1980, my family had decided that pneumonia at the hand of frozen sea spray was a welcome family event. Not sure if any of us became bed-ridden after this shoot, but I can confirm that the video from which I stole this image is further proof that I was an addled child, displaying clear signs that I would later become an addled adult.

The unamused and slightly stunned expression on my face is also why I have my hands angled awkwardly; I had been ripped from my playtime in the sand so that the taller people could pose with my little self. In the video, I am waving my paws’round because they are dirty, and even then, I didn’t wish to be improper and run sand across my grandmum.

Though still very young, much of the captures are of me watching others like a true creep, and playing alone with what appealed to me only and with neither interruption nor direction from anyone else. Oddest is that I appear quiet, though momma tells me this has never been the case as always, I sat alone either chattering animatedly to myself or singing noise, like just last weekend.

Shortly after the above photo, my momma locked me between her legs to fasten a poncho around my neck; a poncho I still have today though too small to wear, but for a hat or interesting sleeve. She is struggling with me, and before she has a moment to catch her breath upon my release, I have made like an ostrich and dived head-first for the sand, while simultaneously whipping the poncho back to fashion a noose for my neck.

In vain I kept watching the video to figure out what in the f/k I was doing, the magnum opus that required so much attention and determination. Sadly, it was nothing; actually and literally nothing. Instead, it appears that I am broken-record and saucer-eyed running my hands through the sand over and over and over. Creating space in sand, lunatic petting for some elusive treasure which I had imagined. Maybe the point there is not that I am in search of something, but rather that I have always best been satiated by the journey itself.

I watched fascinated by three generations of women: grandmum standing strong, matriarch over all; mum popping up from the sand, with hair a mess, and laughing wildly; Camilia whose elegant features appear cut from a Roman bust; and then, us.

Little children staggering toward the sea, crying, pointing, arguing, falling, laughing, burying our hands into each others, completely and totally innocent to all that would displace us to February 2012.

Divorce.
Death.
Occupation.
Exile.
War.
One generation imprisoned in Libya, another in Occupied Gaza, and a third “free” but apart in Canada.

This video reminded me.

I remembered that since my grandmum was 75, she has not made me her sweet chai, not her bitter coffee, and I have not eaten at her table.

I remembered that since she was 75, I have not found the hidden chocolate boxes filled with her jewelery, nor have I sat at her vanity smelling her dozens of perfumes and lipsticks.

My grandmum turned 83 last week.
I have not, since her 75th, sat with my cousins in her kitchen and laughed at our own hysterical imitation of our elders, only to be set quiet by the sound of the morning call to prayer.

Vividly, I was reminded that since the age of 29, my forehead and eyelids have not felt my grandmother’s lips, telling me that I am my father’s daughter.

Telling me that I am hers.

Seated in my office, I watched repeatedly, caught by a laughter which broke a part of my heart and set it adrift until it jammed itself into my throat.

Because my body remembers how desperately it misses the fierce winter song of the Mediterranean coastline at Gaza, with little hands buried deep in the sand and coming up with nothing. Except the love of my family.

12 thoughts on “Girls As Women”