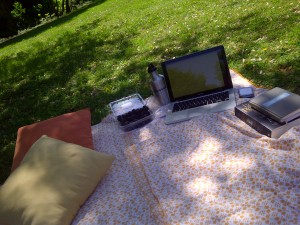 Since moving into The Cloud Cave, I hear neither the sound of wind through trees nor birds calling to one another, beauty by which I was surrounded both at my mum’s place and The Treehouse. Until recently, I never realized how much I loved being woken up by birds at the break of dawn and how eagerly I awaited their nightly singing of the sunset.

This is not The Cloud Cave.

The Cloud Cave is as urban and sleek as it gets. Which, honestly, made me a little sad when I realized that there were no birds singing me awake or taking me from day to night. Set off balance, I became the hysterical urbanite downloading nature sounds (‘a worm eating through a lotus flower? Captured by a Buddhist who found the recording device wedged between a tree and sand? He’s now dead! And he died while recording it? For only $126.99 on iTunes?! BUY!,’ because one time, at centretown, I became a jackass). Until yesterday, when I remembered that there is a beautiful and secluded park less than 10 minutes from mine, which is where I am as I type this.

I am laid out on my favourite blanket with pillows, a book, iced rose water, figs & blackberries, my diary and this laptop, surrounded by trees and birds and all of their lovely chatter. Basically, I am in heaven…made more heavenly because I made out with the sun and now I am blushing.

Speaking of which, did you know that I blush? Deeply, in fact. I blush when I am shy or someone makes me shy because I think they might be really good at the sexuals. (Because, as we have confirmed time and again, I will require someone who is very very good at the sexuals, please and thanks, God.) 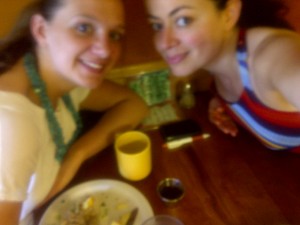 Before hitting the park, Gills and I went for lunch at my favourite br/lunch spot in the city: Wild Oat Bakery & Cafe, where we confirmed that we had complete and total opposite taste in men. I imagine that if in a social setting at a Country Club, she’d be engaging the straight-laced fella in the Harvard jacket and buzz cut, while I would be looking for Johnny Castle.

I just realized that my imagination is stuck in 1957 because a Country Club?

Anyway. I have always been drawn to the one who never wore the Harvard jacket. The one with a lot more than “a little edge,” who has a wildness barely beneath the surface, and who would love to engage my own touch of madness without judging me.

That said, I am also drawn to the physical embodiment of this. Their clothes aside, I have a weakness for men who have longer hair, and who wear facial scruff.

But, it gets even more specific.
I am a fool for a ponytail; set into a state of physical paralysis by a blond ponytail (blame Charlie Hunnam).

While seated at Wild Oat Bakery, a man with a blond ponytail and a light beard came in for a coffee, and Gillian watched my very obvious reaction. I blushed.

I tried to explain the attraction, but finally and awkwardly concluded that it might be an actual fetish. Thinking about it now, I wonder if it has to do with my opposite; that because I am so aware of ‘otherness’ and being as much in this part of the world, blond might clock in at a very basically instinctual and visceral level for me.

Either way, and with colour aside, definitely my imagination runs to all that is promised with the undoing of a ponytail.

And speaking of undone…remember The Viking? For this bit, you need to keep in mind that he is 6’2″ and generally quite large. Also, he is extremely observant.

We were recently trailing behind a human person who interests me. I needed to know who this human person was and what they did, right now, because they have unique hairstylings, shuffling movements, and I don’t think they are believable in their face.

I was carrying my coffee in my right hand, while The Viking was also to my right. Because he is big, he takes wider strides and so moves at a faster pace. Additionally, I was in 4.5″ heels and so automatically slowed down.

I started waving my left hand at The Viking’s left ear, but I couldn’t reach past his step to land in his periphery.
I as-small-as-this-font “…hey…hey…hi…pssst…The Viking…?” but he was preoccupied in his mind and so could not hear my whisperings.
I poked his shoulder but he didn’t react fast enough because — have I mentioned? — he’s big and so it takes longer for the messages from his sensory nerve fibers to reach his brain.

Naturally I thought: I need to improve and facilitate his seeing me.

Because I could not spy a flare gun, I instead opted to become a wildly animated mime. I was bobbing and weaving on my 4.5″ and running a little bit to ensure that my waving left hand was landing in his line of sight. Were my right hand free of coffee, I might have tugged on random pieces of his hair and ear.

For about 15 steps, I Marcel Marceau’d and found humorous how blind The Viking was, a man who is — as already mentioned — otherwise extremely aware. It never once crossed my mind that he was actively ignoring me.

This only crossed my mind when he stopped, turned to look at me with his awful brown eyes and said Fair Lady. I note that you are gesticulating wildly and so humbly request that you please share with me this information which will surely enrich my The Viking life something quite amazing and interesting, and here: Have this flower which I grew and picked specifically for you. Before you begin speaking, please also know that inside of my head doves will be released in tandem with the platinum information you are about to put forth into my ears…, only it sounded more like “Maha. What. I can see you.” I noticed that he wasn’t actually asking me to engage and this set me to laughing because awkward makes me laugh v v hard.

Because he’d stopped abruptly and I was already in motion, I stumbled forward a little bit still with my wave-y left hand raised next to his ear, now in his face and with my fingers nearly up his nose (who doesn’t like a little tickle now and then?). I bobbed and weaved a little bit more then finally stopped to say The Viking! You are far too kind and gracious and might I keep the doves and will you grow me butterflies that I can walk on a leash and you should sit down to hear this incredible bit of information I am about to share…, only it sounded more like “Why aren’t you answering me? I’m trying to ask you a very important question,” laughing.

Lucky me, The Viking has a hard time not laughing.

And so the conversation went. We now have a signal communicating to stop the conversation for when The Viking needs to let me know that he fears I am being awkward, rather than merely vanishing in his head, leaving me to either make a run for the hills or wind-up toy myself into where he thinks he is safe, that I might pull on his ear, tug on his hair, and poke his shoulder until he listens to me. (There Is No Sanctuary! are the House of Zimmo words.)

So. Next you see a The Viking making an awkward gesture near his face, feel free to also look for a brunette having an equally awkward conversation (with herself).

10 thoughts on “Ponytails, parks, awkward communication, and The Viking”