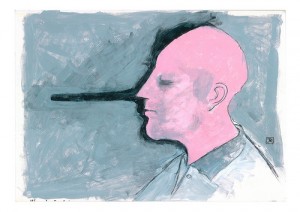 Thank you for your amazing site. My friends have been reading you for years and then we talk about your articles afterwards. I was in a really shitty relationship for almost 4 years where my ex was super jealous and we would fight all the time about stupid stuff. I started lying about things not because I was doing anything wrong because I didn’t want to deeal with the jealousy or the fights. After a while I started lying about the stupidest little things that didn’t need lies. I am now dating a new guy whose pretty amazing and he caught me in a really stupid lie and now he’s really angry. I don’t want to lose this guy and I don’t know what to do. How do I stop lying?”

Sometimes, I love people. Today, I love you. Well, maybe not today but, like, the day that you wrote me, on Saturday – I began to love you without even knowing you. I am sorry that it has taken me days to respond.

Here are a few things that you should keep in mind, of which I have no doubt that your guardians taught you:

The truth is that we live in a world where honesty is brutally under-valued and very much the subversive rather than the norm. High-fives and hugs to you for wanting to elevate yourself above the sh/t heads. But, I will strongly caution you not to be changing your behaviour for someone else; rather, that you are doing this because to remain in your current state is far more difficult and uncomfortable than what it will take for you to move in a different direction. Change isn’t easy, and it’s why people get paid tons of money for being Change Management Experts.

The answer to your question is two-fold, one to do with your new piece, and second (more important than the first) is to do with you.

On Your Piece
We all have triggers that belong entirely to ourselves. Clearly, some of your triggers come as a result of a difficult relationship with a difficult man but they’re still your triggers, and unless you communicate them to your new piece, he can not be held responsible for stepping on a landmine.

You need to sit down with him and start your conversation with: “Babe. My pants are on fire…” and then get your hands dirty and your knees bloodied while telling him the truth, even if you feel like you’re going to choke on it. If he is a man worth his salt, and someone who cares about you enough, then he will engage what you’ve placed on the table. If he’s not willing to give you room to commit an error, and then recover from it, this relationship will not survive.

Before you do this, and if you really think you’re going to pass out, either have a drink or get on your knees and say a prayer for God to give you the courage you need to step up and do the right thing.

On Your Self
Lying, like any behaviour is best seen as a muscle. If you exercise the lying muscle enough, it becomes a meat-head and your honesty muscle atrophies. Your exercise then has to be two-fold: (1) Stop lying, so that the liar muscle weakens; and, (2) Start telling the truth, so that the honest muscle builds up.

Eventually, the lying muscle will become too weak and the naturally strong muscle – the truth teller – will always step into a situation and the environment presented because it is the stronger of the two. Exactly like when your stronger arm compensates for your weaker arm.

My advice here is: Get it done.

It’s really that simple. You want to stop being a liar? Then stop lying. And while you are engaging this No Lies Policy, please give yourself a little room for error. Your natural state, out of fear, is to lie to self-protect, so that is your comfort zone. Naturally, you will every once in a while have to default back to your comfort zone (because, you know, it’s comfortable and familiar). Be okay with this, tell your man about this, and do your best to remedy this sooner rather than later. In due time, with diligence and effort, you will find that the distances between defaulting to your natural state of pants on fire grow exponentially.