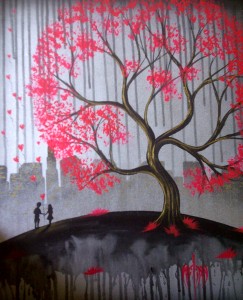 After an incredible couple of hours of faith and music filled conversation over lunch at Urth Caffe, I had to make my way home and so chose to walk along Venice Boardwalk.

Along my walk, I found myself dancing around an older couple, enjoying a little tarantella in the middle of everyone, lost in their own space, moving to their own time. I was taught the tarantella at one of the million Italian weddings I attended a lifetime ago and so stopped to enjoy their little groove when the older gentleman let go of his woman and grabbed me for the dance instead.

She clapped and laughed and danced around us while I eyed to see if either one of them was trying to thieve something from my purse. They were not. They were just two amazing people lost in a moment of their own making and they had enough grace to let me share in it.

After our dance, I purchased an espresso (because I was coming down from my pumpkin pie at lunch rush) but they did not want anything. We sat together; I didn’t ask for names and neither did they. Instead, I stared at them as they held hands, and cuddled and she blushed and he petted what little is left of her hair. I asked how they knew. I asked what it was like when they met. I asked all about their love affair, going on 37 years fyi.

He did most of the talking. He told me that they were friends – though there was something extra so ‘friends’ only in the way that two people with tops chemistry which they are both ignoring are friends – who fell in love.1 That from the instant they kissed, their friendship morphed into everything which I was witnessing still today, and that the rest was — as they say — living happily ever after.

Like a deranged surveyor, I asked them if it was ever difficult after that kiss, and they both nodded ‘no’ simultaneously, like the bodies of synchronized swimmers coming out for a look and see. Truth told, I nearly yelled “I KNEW IT!” Only instead, as their audience, I quietly believed them as surely as I believed in the love that was lighting up in front of me.

Every happy couple I know? Two secrets: No kids. Once begun, it was easy. (My uterus just tried punching me in my nose and my mother just yelled. Please don’t confuse this with I don’t want children, because I am still gunning for a little boy, where do I place my order?)

I thanked them for the dance and their time before making my way down the rest of the Boardwalk where I found this piece of art work, my art purchase form LA, scooped up from artist Wilian (pronounced William) who was at one point gracing walls with this, as beautiful graffiti. What a crime that anything of his would eventually be painted over, or washed away…

This painting, she is a reflection of my mood today and I can’t wait for her to adorn herself on my wall at home.

(I really feel like I must offer here full disclosure. These people? They’re probably high on weed, but that shouldn’t detract from the amazingness of their awe for one another.)

———-
1 This, by the way, can never apply to me. I don’t let possible chemistry slide. Meaning, if I am engaged in a friendship and I feel any kind of chemistry, I let it be known. I’m neither a fan of pretending it doesn’t exist or fidgeting through some awkward hurtful game.

7 thoughts on “Love on Venice Blvd”