From terrible, to v good poetry 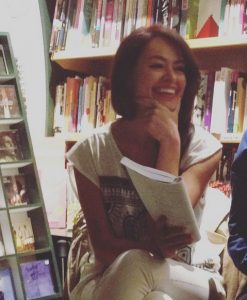 It has been a minute since I wrote you, and for this I am sorry. I have read every single message you sent, and I thank you for your overwhelming love and concern.

Contrary to how it has appeared here, my home for over 13 years, I have been writing exhaustively and publishing elsewhere. Most important is that I found a new voice, of which I had not been aware, and this is its birth story.

At end of summer 2016, I was faced with a bewildering situation, partly of my own making (rooted in my unyielding belief that people are, to their core, good), otherwise completely due to the unkindness of a new man. A friend I trusted, then more, then nothing, and now a comfortable part of my past. I am neither too proud nor too shy of the dramatic to say that that experience, unlike anything before it, seemed to cut out a part of my skin, char it, then force-feed it to me. (For this man, today, I only wish health and a gentler heart. And that he never treat another woman with the same unkindness he directed at me.)

Without getting into the finer details of a story no longer worth engaging, it is important to note that the situation lent itself to one of the most profound stages in my life because it was the first time I refused to allow pain be the only offering he left at my feet. Instead, I decided that I would dive into every corner of this betrayal, explore it, and turn it into art. I decided that within a year, I would have a book to send to publishers; that what he left behind was rubble, from which I would create a different kind of worship.

And so I wrote. Really. Sh-tty. Poetry. Like, spectacularly sh-tty. So terrible, that if anything – I hope it gave my friends a laugh, those who were too gracious to yell that I stop with the horrendous girl-who-is-sixteen-years-old rubbish. That they were words and thoughts I should have saved for my journal. One that I would later burn. Only, I did not. I instead proudly put the terrible poetry on display at instagram. Sometimes, dear readers, after scraping the bottom of the barrel, we must get on our knees and snort what’s left. Something I did with great expertise, like it was a paying fetish.

I understand now that what I was doing wasn’t writing; it was shadowboxing.

As any writer worth their salt understands, rarely does anything good come from a first run. Which, somewhere in my bewildered heart, I knew. I knew that there was rhyme and PoetrEEEEE and then there was lushness and painted scenery, spun and then crystallized with a deeper imagination same as that in the eye of a first love-fall. I reached that by May of this year, when I had reformed all of my earlier pieces and uncovered new ones from a different material than the first batch.

Since late May, I have been sharing my poetry with journals, rather than posting them here. I decided to go to the community itself to ask about the caliber of my writing. AlhamduliLah, it seems that it is relatively high. To read it, you may head over to my About / Literary C.V. page, where there is a list of the poems published to date (and two that are coming soon). The photo I chose for this post is a photo of me reading one of my stories; it is the photo which I have decided to use for my poetry, alongside my author’s bio.

Sidenote: I have had to slowly rewire myself to not consider it bragging when I discuss how others have responded to my poetry. Women are taught to be small, which is antithetical to pride. But I am proud because I worked really hard to get here. None of this was handed to me, and none of it will be in the future, and so pride it is. This theme regarding the requirement that a woman be small? It is an article about which I am writing, so keep an eye open for it.

At present, I have a collection of over 230 pieces which I hope to have published within the next two years because the gestation period of a poetry book rivals that of an elephant’s. InshAllah, by 2018. And if no editors wish to publish a book of this length because poetry (literally) has no money in it, then I will self-publish as most poets already do. Either way, it is happening(, unless Allah has different plans for me).

I must admit that I am still surprised that poetry is where I was hiding one of my strongest voices. For someone as long-winded as I am, whose most comfortable has traditionally been either humour or long-form essays, I am surprised that brevity is where I found strength. Perhaps that ‘get out of your comfort zone’ pin is truer than I would like to admit, but there it is.

My focus this last year has been on poetry, which is a great part of the reason I have not written here. Further, and since the man above, I couldn’t be a-sed to deal with men. After him, I also decided to only engage boys who presented no complexity. You will not be surprised to learn that for a woman such as me, that became boring very fast, and so by end of 2016, I instead binned all men in my world and shut the door to the rest. My writing here has traditionally been where I sort through trauma, and frankly, without men, there has also been no trauma. (I understand that this says as much about the men I choose, as it does about what attracts me. An essay for another day.) Also not surprising is that when I closed this door is when the poetry reformed itself; it’s when I wrote the bulk of the 230 poems, the ones I would in May start to send to journals.

That’s not to say that other non-romantic challenges didn’t come up, which they did. It is to say that at no point in the last year was I able to face them, in order that I might write about them, so that I could then put them to sleep. They were simply too heavy to face, but unfortunately, that meant that I instead let their weight almost break my back. ‘Almost’ because if it weren’t for some truly astonishing and extraordinary women in my life, this last year would have absolutely shattered me into a million pieces. All of which is to say that I am out from beneath the weight. Finally, and alhamduliLah, the world is light again, and I pray that it remain as much for as long as possible.

I promise to write again soon about some of the challenges. Again, thank you for your curiosity about my whereabouts and your reaching out to ask after me. You are each a blessing in my life.

2 thoughts on “From terrible, to v good poetry”