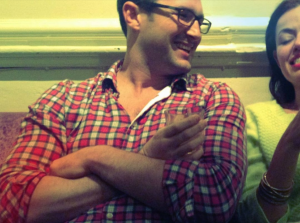 Two things, one of which is: Feeling secure.

But first. I volunteered to go into a war torn country once, to help with the evacuation of Canadian civilians and whilst there, met this fella. Basically, a State-sponsoured taker down of Bad Men. My favourite kind of man.

Our first evening together, we were inside of the green zone (outlined as a ‘do not bomb here’ area) and the bombs continued to drop outside of the green zone. Loud, earth-shaking, terrifying. Having experienced this in Gaza, it took everything out of me to pretend I was unbothered (while the Narrator explained to the audience that I was very much bothered).

We had finished dinner and were headed elsewhere when we began to cross the street. Before I stepped off the curb, he very quietly and without asking permission or telling me what he was about to do (DO NOT BE A RAPIST!) tucked my left hand into his right and pulled my left shoulder in behind his right one. I did not say one word because I was too busy felling fuzzy and safe while the bombs continued to drop and shake the ground beneath us.

The simple act of his strong, broad, and thick shoulder over my narrower, and far less-murdering female shoulder removed me from our immediate environment of war, and death. Literally, the world fell away but for us. It took all of my will not to burrow beneath his shirt and just fall asleep.

The second time it happened, my Jilly and I were seated in a restaurant when we were suddenly man-flanked by several fellas, with one of whom I spent the better part of the evening discussing the merits of Friday Night Lights as the best show in the history of television. The better part of an evening because he was heavily Australian accented and most of the conversation was in fact of me communicating any variation of what was that?

He, like the first, placed his left shoulder over my right one for the length of our conversation. It was a simple matter of physical fact which, had it made me uncomfortable, I would have addressed it. This photo is in fact of us, the evening in question.

Like a demented statistical surveyor, I am constantly wondering about the why is it that of everything before me. Naturally then, I had been curious why is it that of all the male-specific moments strewn about my life, these two are among the most poignant? Easy, in fact. Because there was a sudden bubble of security in which I had become encased. Like, if in the war torn region, the aggressor had in that moment dropped a bomb directly in front of and knocking us back off our feet, I would have felt safe; in London, had the wait-staff come barreling at us asking if we wanted shepherd’s pie, it’s great shepherd’s pie who wouldn’t want shepherd’s pie fine then what about a potato?, I would have been monumentally alright.

Speaking with the women in my life about this, ranging my best friends including my mum, none of them were surprised, all of them experiencing the same thing in one way or another. A sense of security extending well beyond the physical, but most easily recognized in this incarnation.

What it is, really, is the expression that we are not alone. That we are a part of a team; that there is someone looking out for us and is at the ready, should we need to tag them in. Equally as important, they would instinctively know when to tag themselves in (which speaks to a greater need for the best kind of un/spoken communication between lovers).

I imagine the flip-side affects men equally (I am hetero, so speaking in Heteronese). Though I have absolutely no statistical evidence to support the following, a part of me is inclined to believing that a man who experiences home intrusion and is incapable of protecting the woman, has a far more difficult time recovering from the trauma than a man who was able to protect the female. I write this firmly planted in the Animal Kingdom, and at the sake of failing Gramsci. But doesn’t this certainly sound like some kind of common sense?

For me, our parents provided this sense of security when we were children. As we grow into adulthood, this shifts slightly between friends. But there is no greater felt expression or experience of it than when it is within the confines of a romantic love, the role belonging to and taken without hesitation by our chosen lover. Here, they be male. (Again – hetero broad writing.)

Now sure. We don’t need to be protected. We are strong women who do not need protection, absolutely. Maybe. I mean, if that’s your belief, then by all means – be my guest. But f*ck if it isn’t helpful, eh?! Or welcome?! Or just, generally, a lovely feeling to know that should we need to tap into that resource, it is there waiting for our ‘excuse me, pardon me, but I was hoping you might be able to let me…‘ fall asleep beneath your shirt while you protect me from this world.