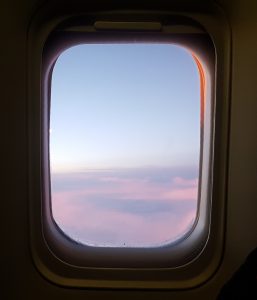 Somewhere over Great Britain. I could have slept through her, but decided to keep her company instead, while drinking the truly shit Air Canada coffee.

I am presently enjoying a far better coffee and listening to Paul Simon, considering what I will make as first piece in my new journal. I have avoided writing these last few days, only because the thing about which I am inclined to write is a thing about which I am sick and tired, and my preference is to neutralize it once and for all; I fear that writing about it will instead magnify it and I am in absolutely no mood, so my pen nib remains retracted.

In entirely unrelated news, I am watching four men (the first pair sat across from one another; the second, next to one another). None of these four men are speaking to one another, so I have decided to create their own dialogue on their behalf. There are now bubbles above their heads and the first set are discussing the latest football game and how one of their brothers-in-law recently began working at a Waitrose (well done, him!). The second are arguing about the younger one’s girlfriend whom is disliked by the elder of the two. I have made them father and son. This scene is the first crossing of paths which will set into motion the discovery that the woman whom the younger of set 2 is dating, is the sister of the brother-in-law who is the recent employee of Waitrose.

The couple will break-up. One of these six will murder another of the six. It is not whom you might assume, because it is not a crime of passion.

Me? I’m going to focus on not getting murdered and my first journal entry.

Today, I am grateful for:
1. LHR’s T2 Caffè Nero, and the fact that I still have my loyalty card which, though has only five of nine stamps, gave rise to quite a bit of excitement at the counter when found. And ‘by gave rise’, I mean I was very happy and in this happiness all alone. Certainly after I left, the employees concluded that I am some kind of very low-grade simpleton.
2. That the eyes in my head work, and I am able to watch a sunrise.
3. Friends who, across oceans, when they cannot wrap their arms around me,  send me gifs of babies and puppies instead. Thank you L.

Postscript: I am writing these entries on my phone, and placing the screen-caps on instagram. There will be typos which I notice only after instagram yells at me. Forgive them, and know that I always return to the original post to fix my blips but do not repost the piece on instagram. Cheers and thanks for your patience; I am still sorting the format ❤