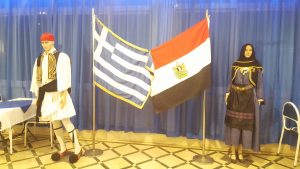 Superpowers told me to go to The Greek Club, “a Downtown institution and a popular hangout with liberal Egyptians, artists and foreign residents.” (Lonely Planet)

At first, I thought that I had maybe landed here by accident; that uber had taken me to the Hellenic Community Center, not the Greek Club. But nope. I was in the right place.

When I walked in, in disbelief, a man at the front merely nodded me down a hallway, without saying so much as a hello. At the end of the hallway were the above two amazing mannequins and my reaction, definitely caught on camera, was hysterical laughter. My only thoughts? I am either her to die, or play backgammon with old Greek men. I was wrong; only in Cairo would the Greek Community Center be such a hipster hang-out. Check out their bar, my friends – 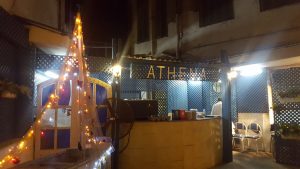 Honestly, and without sarcasm, how can anyone resist?

Their wait staff are dressed old-school. AND. One of them is straight-out of Pulp Fiction. AND they don’t really serve Greek food (BOO!), though they serve Feito Mashrom, which might make you feito your hipster pants. Or so is my guess.

When I walked in, there were only three others and I considered asking each one if they were Greek. Had they said no, I would have demanded they become Greek. What’s the purpose of a Hellenic Community Center without Greeks?

When we left, it was nearly a full house. High rec if you want a unique experience. And for those not in Cairo, I suggest you in fact play backgammon with old Greek men. They’ll give you the best advice this side of Santorini.