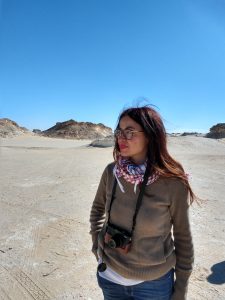 He asked me why I had never married, and I told him it was because I had not yet met a truly honest and trustworthy man.

Later, he said “I want you to know that I’m going to do everything I need to do to keep moving us towards marriage.” Not a light sentence, yes? I was reflecting on this while in the desert, thinking about how to heart I took this very promise, because he told me he was a man of his word. Except, individuals of their word are those who are master over their nafs, rather than slave to it. And someone who is slave to their nafs is, by very definition, untrustworthy. At present, he is the latter; for this, Allah has his reasons.

The truth (and the sad reality) is that he meant it. Though I understand now that he wasn’t really saying it to me. He was saying it to himself, both a promise and a challenge to his circumstance. Because promise and challenge are what he needs. This realization was my oasis in the desert.

Back in Cairo and another morning spent at 57357, which took an unexpected but welcome turn. After an hour of art therapy with a new little person friend, I was pulled to meet quickly with two important (English-speaking) individuals interested in supporting the hospital, both of whom were in suits, next to an equally suited-up one-of-the-most-important-people-in-the-hospital persons. Remember I told you that I dress like a clown while volunteering? Well. I am dressed in banana yellow jeans, my Cookie Monster t-shirt and runners. Hopefully my winning personality is what matters, right?

Me and my clown ass went on a food tour after the hospital. The food tour was prepared by Kareem, and because I know how he eats, I brought a massive takeaway bag with me which proved the exact right thing to do. We ate macarona bil beschamel, koushari, mulukhya, fraakh, batata 7amra, fried eggplant, basaara, drank hibiscus, and subya juices, and finished with kunafa and rice pudding.

Sidebar: I want you to know something about Kareem. He is an extraordinary man, open to advice, open to knowledge, and open to growth, and growth he is doing. I am so honoured to call him family, and equally excited to watch him develop as a man. T did right by her children.

From there, we were supposed to head to the City of the Dead (named this, because the land is a former cemetery turned into a living area. Over 500,000 sleep directly between graves, while others have built small homes between them.) but there was confusion about start times, and the confusion crashed into Cairo traffic, worse only after Jakarta, and so I ended up cancelling my evening plans. But I did get my hair blown out so I am not too sad.

Today, I am grateful for:
1. Egyptian hair salons.
2. Kareem and the fact that he refers to me as his sister, not his step-sister.
3. A heart that refuses to brittle.