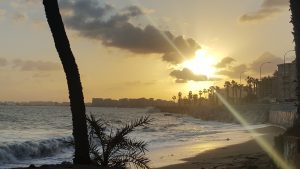 Sub7aan Allah. March 28, 2014 was a very important day – it was the first time I read my work aloud, under my own name. It was also the first time I would meet Ghadeer. Meaning, and unintentionally, it was exactly five years less a day, that I met for the first time the woman with whom I spent today, the woman whom I had only seen twice a little later in 2014. She is one of the two Min Fami editors, the first publication to which I ever sent my work in my own name. The second editor has since become my neighbour, Ghaida, and a dear beloved, whom I absolutely. Adore.

Ghadeer and Ghaida accepted the two short stories which I had sent in; this is a video of the reading which I did, and of which I continue to be so very proud –

Our day was spent roaming Azza’s and my neighbourhood, Pedregalejo, catching up and learning one another anew. Tomorrow we spend our evening in her hood, at her favourite Italian restaurant, owned by an Italian gent from Rome, now resident in Spain. Ghadeer has been here for a couple of months and so has found her own tempo, into which we will fall then, inshAllah.

Photos tomorrow (heart emoji). For this evening, I’ll leave you with the following two – the last restaurant of our day, which juts right into the Mediterranean, and into which the waves crash – 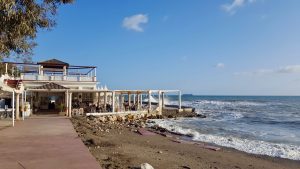 Today, I am grateful for:
1. All of this. I have been given the opportunity to just do all of this and nothing else. This is absolutely incredible, and I am so grateful.
2. Having all ten toes, and all ten fingers. They help a lot.
3. Aalya. She is one of the very few beloveds who, five years ago, was aware that I wrote (outside of my political contributions). Under direct threat, she forced me to send Min Fami my stories. It was a difficult decision because I didn’t want to send these in anonymously. Min Fami was the first time 98% of my family and friends became aware of the fact that I wrote, and that I even had this home. It was a very strange thing to come out of the writing closet, and I owe it all to Aalya’s threat that she would no longer be my friend if I did not submit.