The COMPLETE Ridiculousness (Of Me) 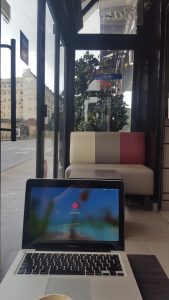 This weekend, I decided to pay an excessive amount of money for a couple of eggs, under the guise of ‘brunch’. I went to Coutume, sat quietly at a long table for singletons (facing the wall, in case you’re wondering, because you might catch something if you make eye-contact with our kind).

I chose which of the €28 eggs I would eat very slowly, slid aside the menu, and pulled out my laptop, in prep to order.

As soon as I had placed my laptop onto the very small space before me, which – again – faced the wall, and so did not interfere with or offend anyone’s line of vision, a worker elf conjured himself nearly in my lap to explain that THEY DO NOT ALLOW LAPTOPS ON THE WEEKEND.

Stunned that he was an elf. Stunned at this rule, I looked around at every fucking customer ON THEIR MOBILE DEVICE ignoring their company.

I guess size really does matter, I thought to myself as I put away my laptop and explained that I needed to work and so would go elsewhere to eat.

The elf smiled and I quietly walked out, €28 still in pocket, actually almost in tears. Because I took it very personally. Because this was a day before I got my period. Because that means I should be inside avoiding human contact staring at the wall instead, but only if the wall is the exact shade of white, or else I will also take that personally.

I returned to the scene of the crime. Today, it is a weekday. Which means it’s not the weekend. Today, I decided to try lunch in this shit-hole of a restaurant with elven staff.

Today. I sat down and chose from the menu, then slid it aside to pull out my laptop. Which, when I did, guess who the fuck conjured himself to breathe into my ear WE DON’T ALLOW LAPTOPS BETWEEN 12 AND 2.30.

Today, I am not in the state of emotional turmoil brought on in the 24 hours leading up to when my body sheds an egg and I bleed for days without dying. Today, I have the usual fire in my bones, and none of the sadness.

So today, I looked around when he said it and actually snorted. SNORTED, and exclaimed “This is absolutely RIDICULOUS.”

EVERYONE was on their phone and I have no idea what kind of unhinged person forces this down the throat of a would-be customer. I snorted again. I side-eyed every customer. I narrowed my eyes at them, too. I smashed my laptop closed. I muttered. I slammed my laptop into my bag. And, I flipped my jacket on as though it were a cape. Finally, I laughed to myself and shook my head in case one person in that place still thought I was sane.

Also. I contemplated punching elf in the face with my laptop. Maybe cutting off my hair took a part of my brain by accident.

He heavy-breathed some shitty excuse like “It is lunch time”, as though these magic words would somehow explain the total stupidity of this coffee shop’s rules. As though this is some French understanding outside of which I stood. Like threesomes.

The elf stepped away, and the two barristas eyed me like I was some kind of explosive device. I really wish I had been wearing my This Is What A Radical Muslim Feminist Looks Like. Certainly they would have all been ducking for cover.

After leaving, I am pretty sure my rage blew Jenn’s ear off when she listened to the voice note which I yelled down my phone as I walked down the street, huffing and puffing like a spoiled child. (Thanks for your solidarity, Love). 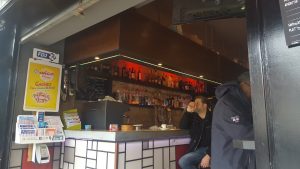 I did finally cool down enough to find myself a little not-quite-café which might have been a betting joint. Is there such a thing, here? They served only drinks – alcohol and coffee, but everyone inside was, I think, placing bets and watching races.

I fit in exactly as you might imagine. The coffee was good enough that I plan on returning. The men (they were all men) eyed me quietly and politely as I had two excellent coffees, and pulled out my laptop to work, which no elves asked me to tuck away.

Today, I am grateful for:
1. LIBERTÉ, mother fuckers. LIBERTÉ for me to have the company of my laptop and poetry as I eat quietly by myself.
2. Finally finishing my antibiotics. I mean. I love yogurt, but two weeks of 500g of yogurt daily has given me insomnia.
3. Always missing the rain. Since arriving, the clouds have been kind enough to let me shelter before they unleash.