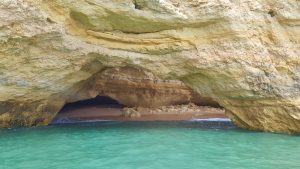 That’s one of the two entrances to the renowned Benagil Cave. It’s a beach inside of a cave, over top of which is a hole that lets in the sunshine. It’s the natural wonder equivalent of the man-made wonder that is the Albufeira Marina, often confused with Don Johnson’s wardrobe from the 80s. 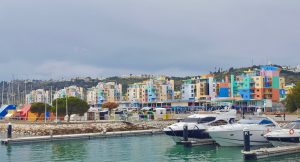 I spent most of my day on a boat cruise that was a perfect mix of sights and total chaos. Though another storming day, there was little enough rain, but the clouds made for a rather tumultuous ride which saw five of 125 people sick and eventually asleep. I was on the upper deck in three layers plus a pancho plus an umbrella plus a ginger ale watching the lower deck from a safe distance, though did contribute by throwing down a packet of tissue. Don’t ever call me selfish. Having sailed enough to know their pain, I wanted to throw them against a cliff and yell for them to free-climb to the top. Less pain than enduring hours on a boat in their condition.

After that fun, I found a Cat Colony, and a lovely cemetery as I walked around the last unseen neighbourhood in Albufeira. At the Cat Colony is a turf war with seagulls, and the cemetery was quite beautiful. (Cemeteries, by the way, are one of my favourite places to visit, always peaceful.) These three streets wound me over to a restaurant look-out point where I was able to watch my last sunset in this corner of Portugal.

Photos from the boat cruise over this way.

Today, I am grateful for:
1. Spaghetti. Another flavour from home, so very welcome today.
2. My baba. Though he is not an emotional man, though we had our growing pains, though I fought against him so very much after their divorce, my baba is today a tower in my world. I am so grateful for his presence, and support every day, alhamduliLah.
3. Fuzzy cozy socks, of which I packed three. Slipping into them feels like a spa day every day.