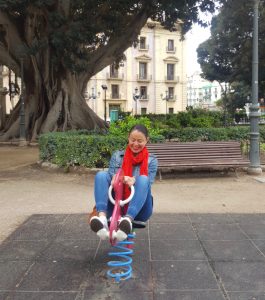 There are parks all over this city. Most all of them have play structures for children, but this was the only one which we came across that had these bouncy rocking horses. After launching myself onto one, I made Azza do the same. We had ALL CAPS fun, and I want one of these in The Cloud Cave as a living room option, for sure.

A not-so-minor observation about the men. They are very easy on the eyes, all of them pretty boys in their face, but certainly with metaphorically calloused hands in their machismo. The most beautiful men I have ever seen were in Portugal, and Spain has confidently slid into second place standing. Azza was asking me why I thought this was the case, and I mentioned that it’s entirely because of ‘the race mixers’ (if you don’t know this pop culture reference, please watch the absolutely awful film They Came Together).’ The Moors worked their magic on the Spaniards, dusting their skin in cinnamon, and lining their eyes in kohl. Eyelashes as thick and as long as you can imagine, full mouths for soft landings. Thank you, gentlemen; you’re welcome for the spread of Islam such a long time ago.

This beauty influence is everywhere, in fact. Like at the Catedral de València, which was at different times a Roman temple, and a masjid. Inside, they say they hold the ‘Holy Chalice’, from which Jesus (blessings upon him) drank during The Last Supper. (It seems appropriate for me to capitalize these words; let me know if I’m wrong.) Rather than going inside, we opted to circle the outside instead, which is how we found the Plaza de la Virgen, and where we sat by the fountain and enjoyed some fresh fruit and a surprise conversation with an American family from Walla Walla (‘They liked it so much, they named it twice’), Washington.

We spotted the baby before the rest of the family. He was hangin’ off of momma, with one fat leg outstretched straight ahead of him, looking extremely agitated. Momma noticed that we were looking at her littlest seedling, and walked over with him strung across her front, and her daughter walking next to her, in hand. Dad followed and we had an absolutely lovely conversation for at least seven minutes. 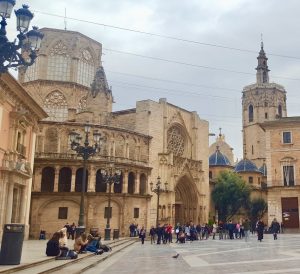 They were so friendly, and so open and chatty, it took us by surprise. They’re here for her momma’s wedding and are only in town for the day to catch their flight back home. Safe travels to them; it’s always so nice to meet and chat with new faces in new lands. (Fun Fact about Walla Walla, courtesy of the dad – it’s at the same latitude as France, between Bordeaux and Burgundy, and so the wine grows in the same way. I don’t understand what that means but it is apparently a thing that is turning Walla Walla into the new Napa Valley. Add it to your list of places to visit, friends. It’s name alone is reason enough.)

We padded our way through the Central Market of Valencia, absolutely worth the visit for its interior – the below image is a part of its ceiling. The Market is home to mostly a lot of jamón, and some nuts, fruits, cheese, and vegetables. Speaking of the jamón, it is literally everywhere in this city. Many a coffee shop is called Café y Jamón. Many a bar is called Vino y Jamón. Azza was desperately seeking a croissant sandwich with cheese and some combination of vegetable, but found none. Everything had some element of the piglet in it, and so she finally had a shop make it for her as a standalone. 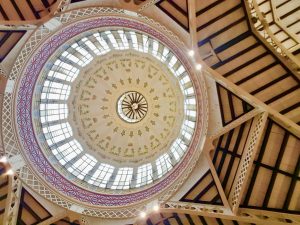 We wound our way home through the city’s many parks, where I found another man reading a book. I didn’t get close enough to ask him what he was reading, but I opted to leave him to his quiet instead. It was a beautiful day full of colour, and people-watching. València, though one of the most populated cities in Europe, carries with it an intimate feeling. Unexpected, and one that I am looking forward to exploring a little more these coming days.

Today, I am grateful for:
1. Making a promise to A to give churros a second chance. Today, we found churros that taste exactly as churros ought to taste, and they were heavenly. Unlike the first round of churros, these were dusted with light sugar, had some cinnamon in the dough, and were served extremely hot and fresh. I didn’t have them with the hot chocolate, however, because chocolate still isn’t my thing. They were perfect without.
2. Receiving the news that momma has been granted an exit permit for tomorrow. InshAllah it will be a safe run out of Gaza, ya Rab.
3. Shelter. I’m starting to realize that the things we take most for granted, are the things most keeping us safe.