The Perch In Belem 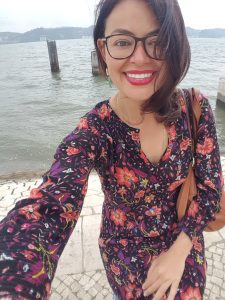 I spent about 30 minutes perched on this thing, and not because my feet couldn’t touch the ground and I couldn’t pop off with any kind of grace. Rather, because it was in a bizarre corner, and so the waves were loud and so calming. 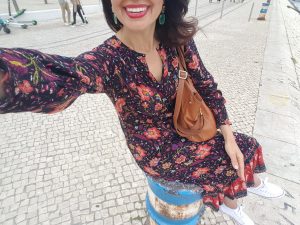 Today was an unexpectedly eventful day. Unexpected because it was supposed to rain and I didn’t expect much. I planned to stay out as long as possible, until the rains. Lucky for me, they never came.

First, I decided to head opposite of what I have been doing, aiming West instead. Only it wasn’t so sophisticated in my head, where my decision was JUST TURN RIGHT TODAY. Turn right I did, and tripped on an ally from which was coming a beautiful violin practice. I couldn’t make out the exact window, but found a mom and pop coffee place which seats FOUR. I ordered my mayohdlate from their window along the street, so I could hang back and listen to the violinist. It was an omen for two reasons: 1) because it was too beautiful a beginning for it to end in rain; and, 2) one of the two things I am considering doing when home is cello lessons and painting. Not necessarily combined. (Right-hand side is where you can see my coffee cup.) 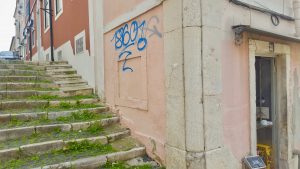 After this, I kept turning right and then just randomly blew down the river’s edge, landing in Belém. Not bad, Lisbon. Not bad.

Because I wasn’t intending this, I Googled whattf to do as soon as I realized where I was. Believe it or not, over the span of 5.5 hours, I did all of the things, starting at having a pastéis at the aptly named Pastéis de Belém (R. de Belém 84-92), which is supposed to be the original pashteesh. I mean. They gave me a packet of icing sugar and a packet of cinnamon, both of which I unceremoniously dumped onto my pashteesh before eating it. The thing is, I don’t like the large sized pashteeshz – what is the plural, y’all? – because they are too much custard. Are we fighting? I really prefer the smaller bite-sized ones because more crust, less egg and sugar filling. Yeah. We’re fighting.

From there, I made my way to Jerónimos Monastery, which was as beautiful as it is described. This is 16th c Manueline architecture at its finest, according to C0ndé Nast (who is entirely too up its ass but I’ll occasionally take its recs). 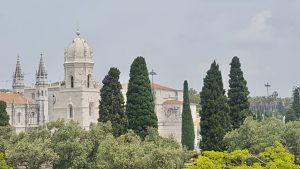 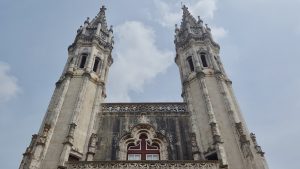 Fun Fact: This is where the famed Portuguese occupiers and colonizers would Spa Day after they returned from places such as India. Gross, right? Almost as gross as this monster of a statue, right across the parks from the Monastery – a gigantic nod to those who thought they were better than others and so occupation and colonization of “undiscovered lands” was their jam. Man, humans are proper pricks. 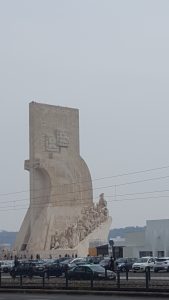 Luckily, I didn’t much need to stare at that or what it represented. The better part of my Belém day was spent inside of the Berardo Modern Art Museum (Praça do Império) because I. Love. Surrealism. And Modern. Art. So much. I was in absolute heaven here and wish to marry a Berardo because I am lying to myself and pretending the Berardos own all of the beauty held in this museum. Come here if you only have one day in Lisbon. Trust me. This is the absolute must see.

Still without rain, I took my chances and started walking home along the water again. I had already been out for 5 hours on my feet, and had another 1.5 to go, so though I walked passed the beautiful MAAT, I decided to save this beauty for tomorrow, inshAllah.

My day ended with Hendrix in a park, watching the sun come out to hello before it was once more suffocated by these Spring clouds.

Today, I am grateful for:
1. The rains happening after I was inside this one time only deal in a lifetime.
2. The sound of waves. It’s been a while since I heard them and they really are one of the most calming sounds for my heart. Rain in trees, too.
3. This entire adventure. Even though I’m not so sure I want to travel any more during this sabbatical, these last five months (!!!!!!!!!!) have been heaven-sent.