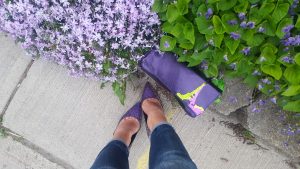 On my way to meet Mariam for iftar, I discovered that even leopard print purple stilettos, and lime green Eiffel Towers fit right in with nature.

Finally, I am ready to share the February Situation with y’all. First, some small background details – my mother is near retirement. Second, she has been a property owner, and hence insured, since 1987. Third, she has only ever made two claims across 32 years.

Her home is her heart.

And in February, four pipes burst beneath the washroom, above the dining area, and wiped out her main floor and basement.

She wasn’t here at the time, but we had Ranoosh (whom I have continuously mentioned throughout the last three months) drop into the house every couple of days. It was she who discovered the damage. I won’t say more about Rana here because she deserves her own post and that, too, it is coming.

In Tunis, I was on the phone with my agency scrambling to finalize my ticket back home when momma sent me a voice note and told me not to return. Rana, too. It was emergency demolition and clean-up, and most of the work that needed doing could be done via email.

We waited while they completed demolition, clean-up, and drying. My mother arrived home on April 4th, and went to complete an inspection on April 5th. She smelt dampness. Remember, since February 9th, the property had been in the hands of the construction company tagged in by the insurance company. There should have been no reason for any dampness to exist. With two months of drying power, that house should have been bone-dry.

I put a stop to the beginning of Phase 2 – reconstruction – and demanded that an outside source unrelated to the construction company who was responsible for the drying be brought in to test the property and ensure it was mould free. This occurred on April 8th, and the insurance company agreed to solicit an environmental engineer. The construction company committed to doing more testing of their own, just to be on the safe side.

Ultimately, if the property wasn’t dried enough by the construction company and either my mother fell ill or the property needed to be addressed again, the liability would be far greater. Everyone agreed.

Every single Friday since April 8th, I have been sending an updated worksheet detailing all things related to property, and asking if there was any new info regarding the drying of the house. Every single Friday, I was ignored.

On May 1st, the Environmental Engineer went to the property to perform their first inspection. On May 4th, we confirmed (because we saw, not because anyone told us; I was being ignored, remember) that the construction company had removed some panels of insulation and brought back in a heater. Two weeks later, a few more panels were removed. This, to us, because no one was telling us anything, signaled that the house was still not dry.

Now. Pause for a second and step to a parallel story. Remember that my mother has been a home owner and with insurance companies since 1987. In 2018, she made her first claim only because someone suggested she do so; I mean, you’ve been paying for insurance for 31 years and you’ve never used it, so use it. She did; it was a small claim of $2,000 because we had a tornado that blew her fence off.

This February Situation was her second claim across 32 years.

On May 3rd, the insurance company issued a letter to my mother telling her that they were not renewing her insurance on June 19th, because she had – wait for it – TOO. MANY. CLAIMS.

This asshole of a letter was sent to my mother’s property. WHERE SHE ISN’T STAYING. And so we received it on May 7th, because I’m not picking up the mail on the daily.

Strike 1 against Big Insurance: They cancel your insurance if you have two claims in five years.

Strike 2 against Big Insurance: They are not obligated to notify you of this in either policy or when you make any kind of claim. Essentially, they fucking ghost you without doing any kind of due diligence on your goddamned history – again, momma had had two claims across THIRTY TWO YEARS, and suddenly? Suddenly, my little bonhomme of a mother is being dumped unceremoniously by her insurance company while she has an open claim.

Strike 3 against Big Insurance: Almost all ‘standard insurance’ companies do this. And those who are willing to take you, will not take you if you have an open claim.

Strike 4 against Big Insurance: As soon as you have two claims across five years, you are labeled ‘high risk’. Meaning, only ‘high risk’ insurance companies will take you. With them, come higher premiums, higher deductibles, and LESS COVERAGE. Because Fuck You, Consumer.

Remember. The reason for the open claim is because the property was not yet dry on April 5th, and as of May 23rd, I was still being ignored by the construction company. Had the property been properly dried across the two months that they had it, they would have been able to begin Phase 2 (reconstruction) as soon as my mother was home, as early as April 6th, one day after she inspected the property. Let’s go with April 16th to be generous.

Beyond the shadow of any doubt, two months would have been absolutely ample for the construction company to complete their work, and for us to close this claim.

But this was not our reality. Our reality was that my mother was going to be without insurance on June 19th, because even the companies who would take her with a WHOPPING TWO CLAIMS ACROSS 32 YEARS, would NOT take her with an open claim.

It was fucked. I am so angry writing it out.

This story, it only gets better. Make sure you come back for Part 2, tomorrow.

Today, I am grateful for:
1. Mariam. Who rallied hard last week without my asking.
2. Stilettos. You make me feel more powerful.
3. Curse words for stories such as these. Thank you.