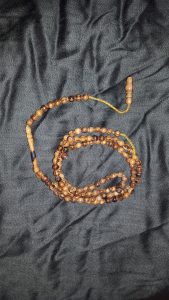 I don’t wear it. It’s my rosary, which I picked up in Cairo. Made of oud, do note the small black marking on the straight edge on the left side of the image. That’s where I mark it with some heat, and the scent of oud follows. Best purchase across the five months.

According to almost everyone, I paid a costly price for it, when one considers the economic situation in Egypt. Too many people told me I had been bamboozled by the seller. I paid $21 CDN, friends; it is hand-made. I wouldn’t want to pay less for it and would have paid far more. Does that make me a target of bamboozlement? Possibly.

Either way, bamboozled or not, I don’t believe the seller would like to learn that he is spoken of in this way.

In the Qur’an, gossiping is referred to as ‘backbiting’, and is in fact considered among the greatest of sins.

The prophetic definition of backbiting, according to Hamza Yusuf, is to say something about another which, had they heard you saying this very thing, they would dislike it. The fiqh (Islamic jurisprudence) broadens this by defining backbiting as the mention of others in a distasteful way, where there is no need.

First, just reflect on the reference to gossip as ‘backbiting’. What a visual. What. A. Visual. And one which is both so telling about the individual committing this act, and the one against whom it is being committed.

Second, I am already very slowly retraining myself to be very careful with my intentions, and my tone. This concept of backbiting demands I pay attention to how casual I am with my language. I have noticed that in regular normal conversation – things which might once have been funny or said without a second thought are, by the above definition, backbiting. Because they’re really not necessary.

Though I have always attempted to be very cautious and transparent by saying only that which I would say to the face of someone, and only ever discuss someone if they have done harm to me, I don’t believe this is enough anymore.

So. The ultimate goal? Aim to not be a cannibal.

Today, I am grateful for:
1. How momma laughs when she is speaking to her sister. It lights up the room.
2. My mom’s cheek which, when I kiss her goodnight, I every time notice how soft her skin in. Like her father’s was, resting in Light is he.
3. Early-days political hip hop. Thank you to Bishop Chronicles for episode 74 and for all of the wonderful reminders. Check him out on Spotify, friends. You will not be sorry. Trust.