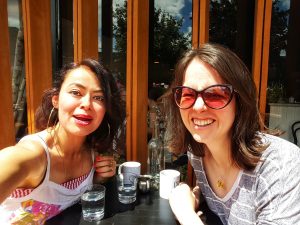 She was in town, and brought with her the sunshine. We couldn’t decide where to look, and were discussing just this very thing.

Though the entire conversation was, as it always is, wonderful, a stand-out moment for both of us was when we were talking about committing to something so deeply, that we feel boxed in, and I replied with Except there’s no box. There’s never a box except for the one that we create.

Side note: I am explicitly and only referencing ideas. Children, financial realities, emotional / physical abuse, isolation – these are real and can, either in combination, or on their own, become factors which force one’s hand. The Box isn’t these things, which I am absolutely not diminishing, and whose weight I would never deny.

To best explain The Box, take me, as example (my favourite subject). I had fully committed to the idea of a man; I followed his lead and committed with every brain cell I had. And though some people will lightly throw out My word is my bond, like for real, my friends will swear on my red lipstick that My word and my commitment are my bond. To my detriment, sometimes. Meaning, every decision I took after that initial commitment was, by my own hands, a piece of wood becoming attached to an earlier decision, also a piece of wood. Sitting in the middle of this little construction, I made decisions, each a piece of wood attached to an earlier one. We can only reach up, sideways, and beneath, so far. To keep attaching pieces of wood means that we are actually boxing ourselves in until we can no longer move, and sometimes not even breathe.

Sitting inside of this little faux construction was, for me, self-imposed until I decided that it no longer was, and just. Simply. Got up, and walked away from where I was formerly sitting.

Take a beat and ask yourself if there are any situations where really and truly, you are inside of a box of your own making. And then remember that there’s actually no box, my love. Really, there isn’t even a splinter to be found…

Today, I am grateful for:
1. My cross-ocean friendship with Jenn, where brunch dates and afternoon ice-cream walks feel like we just picked up from last night’s dinner, though it has been months since we sat and read tarot cards together.
2. The woman walking down Bank St raging that THERE IS AN ESTABLISHED THEATER WORLD IN CALGARY AND WINNIPEG! BUT NOT HERE! CALGARY! WINNIPEG? PEOPLE VISIT FROM ALL OVER THE WORLD BUT NOT HERE IN OTTAWA! HOW? HOW? HOOOOOOOOW? I mean. I almost made a sign and started following her around yelling HOOOOOOOOOW?
3. Brooklyn’s smash-n-mash or mash-up or mix’n-match, I can’t remember exactly which, gelato flavour at Pure Gelato (350 Elgin St). I usually don’t cross Go, rather instead head straight for their Skor gelato. Today I tasted the Brooklyn whatever-n-mash and I officially became a cult devotee. It’s named after the owner’s daughter, Brooklyn, and it’s made up of vanilla gelato and her favourite things – skor, caramel, and one other flavour. Just heaven to your taste buds if you’re a Vanilla > Chocolate fan such as I.