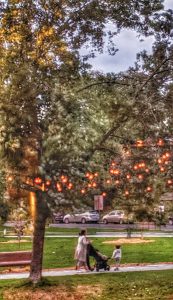 I had to place a reminder in my calendar that today is the third of four (but really five) sunsets on marker dates. First and second pieces of this particular thread may be found in these links.

My spirit…my spirit has moved on, and the only reason my mind returns is because of this writing.

Last year, this time, I would end our involvement, and he would respond by telling me he had been diagnosed with a terminal illness, and that he was dying. Wouldn’t I just forgive him, and be patient? He did not want us to end.

I had been praying istikhara nightly, asking for clarity. Allah provided, and I would not ignore His message (because I had already ignored all of the others for the five months which had passed).

Simplest fact is – I have been dealing with a fraud, and a liar, and so I had neither patience nor forgiveness to extend.

In fact, I had nothing to give, and so stayed quiet until September 13th (the fourth marker) when I was finally able to respond from a place of grace, and to reiterate that we were finished.

Had I responded any sooner, I might only have been able to write: lols! Nope.

When he and me reconnected briefly in early 2019, he refused to name the ‘terminal illness’ (because there was none). But I played along for nine days because I was curious. The need for me to have him admit to what I already knew – the need for honest closure – made a masochist out of me, and only when he maintained the lie for nine days did I finally accept that honesty was not in his deck of cards; I bailed. Again. And for good, because I knew that nothing right was to come from a human so mired in lies and manipulation. AlhamduliLah.

This is when he believed*** that he had no more control over the situation or me*** , and so he showed me his true face. This is the thing about which I remain incapable of writing, the thing which is the fifth and final marker.

***Sidebar: Oddest to me is that to feel he lost control meant that he must have felt he once had it; except what he always failed to recognize is that the only things controlling me were my want for partnership, and Allah. Never him. This is certainly why, what he had intended to recoup from when he did show me his true face, he never did. Simply, he had never read the spread as well as I did. No surprise this, since he had invited el-shaytaan into his heart; bringing with him only an inflated sense of self, and always only misguidance.

Julie was the one who named his behaviour – ’emotional violence, rooted in his own shame, directed at me, but really – directed at himself’.

She was (as usually is the case) spot on – he is filled with self-loathing (as he should be).

When Julie named it, it was because she understood abusive men. She had lived abusive men. She was kneaded and toasted at the hands of one man in particular. I still remember the day she received the news that he had died in an accident, and told me. Five years ago, still as though it were yesterday.

She has asked me to read her story and provide my impressions to her publishers so that they might include them in the final product. That I am honoured is an understatement. I adore Julie as a woman; equally, I love her as the activist and educational force that she is.

I know her story. I have always known her story. But to read it so fresh and in the present has brought heartache for her, and for all women in abusive relationships who then go on to be further battered by the legal system.

For all reasons above, on this marker date is the celebration of men with integrity. Men who behave with honesty, and whose intentions are rooted in mercy and kindness. Men who respect the wishes of women, and who believe in the equality of women.

Muslim men who take heed that abusive behaviour towards women is forbidden because it contradicts the principles of Islamic jurisprudence. We see you. We are grateful for you.

To the rest, see you on Judgment Day, you insecure degenerates.

Today, I am grateful for:
1. Jules, the fat cat whose cuddling into me and keeping me warm.
2. Fall. It is my favourite time of year, and brings with it the gentlest palette.
3. Jackets and scarves. Because they signal that Fall is here.