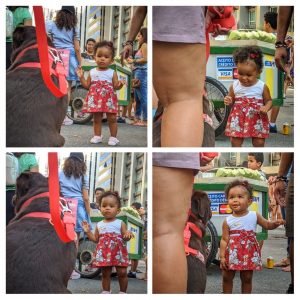 This little bunny was fascinated by the dog, and she killed me when she began dancing. (Photos taken with permission from her poppa.)

São Paulo is an entirely different creature than Rio and the island of Morro. The further South one comes, the more ‘White’ is the population, and so far, topographically, the flatter the city center.

Rio was quite centralised and localised, whereas São Paulo can only be described as ‘sprawling’. Most notable, however, is that there are no favelas within the city, but rather, they are all located outside of the core. From the favelas, on average, it can take two hours to commute into the city, placing an already disadvantaged group at greater economic distance.

Money aside tonight, a look instead at some history. It’s to the Northern areas such as Morro that humans from the African continent were kidnapped and brought, for purpose of slavery. This history is apparent in the faces and skin colour so clearly noticeable after we spent time in the North, and then made our way down Southwards.

“The blacks brought to Brazil were from different ethnicities and from different African regions.Gilberto Freyre noted the major differences between these groups. Some Sudanese peoples, such as Hausa, Fula and others were Islamic, spoke Arabic and many of them could read and write in this language. Freyre noted that many slaves were better educated than their masters, because many Muslim slaves were literate in Arabic, while many Portuguese Brazilian masters could not even read or write in Portuguese. These slaves of greater Arab and Berber influence were largely sent to Bahia. Even today the typical dress of the women from Bahia has clear Muslim influences, as the use of the Arabic turban on the head.

Despite the large influx of Islamic slaves, most of the slaves in Brazil were brought from the Banturegions of the Atlantic coast of Africa where today Congo and Angola are located, and also from Mozambique. In general, these people lived in tribes. The people from Congo had developed agriculture, raised livestock, domesticated animals such as goat, pig, chicken and dog and produced sculptures in wood. Some groups from Angola were nomadic and did not know agriculture.” (Source: Afro-Brazilian History.)

We spent nearly 4.5 hours walking along Avenida Paulista, a major artery here in São Paulo, where all demonstrations are sanctioned to take place. On Sundays, the avenue is closed to cars, and open only to pedestrians. Markets are everywhere, as are random musical bands, musicians, dance troops, artists, and performers of all and any variety you might imagine.

I learned that my preferred Brazilian sounds are equally Brazilian ‘funk’, and the drum-beats rooted in North Eastern Brazil.

Of all the experiences so far, being a watcher at Avenida Paulista proved to be an expression of how vastly different, yet complimentary are the people of this stunning country.

Today, I am grateful for:
1. Every single beautiful man who has dolled up my eyes. And oh lord, there have been so many. I cannot tell you what kind of happily received whiplash your girl has been getting on this trip. More on them soon. (Allah loves beauty, y’all.)
2. The store named ‘Some Accessories’. Excellent expectations management, friends.
3. Ground beef & cheese pastels. OHMYGOD.