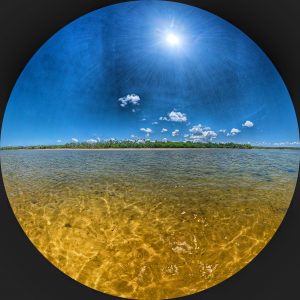 We were complete strangers, and none of them spoke English.

The woman on my left kept rubbing my back every little while, and the woman on my right kept checking in. Later, her husband gently placed a small medicine bottle at the level of my eyes, which was between my knees, and his wife Google translated nausea medicine, and showed me her phone. They read the instructions, and she took a spoon, dropped in 30 drops, and put the spoon to my mouth so I could drink the small amount of potion (whose flavour was shockingly nauseating for a nausea medicine).

I had considered leaving the interior and heading out to deck, but the moment I lifted my head to look upwards, my entire body put up a fight and forced my head back down to between my knees. There was no way I could make the perhaps 10 steps without projectile vomiting.

Natty was outside on the deck already. Brian saw her turn colour and immediately pulled her outside into the fresh air. I had been seated elsewhere and within 15 minutes of our catamaran ride, I had my head between my knees, a bag in my right hand, and prayers on my lips. This continued for 2 and a half hours.

Neither one of us threw up.

Others not so lucky, I heard six people’s stomaches reach for their lips.

Our only option to travel from Pelourinho to the island of Morro was either car and boat, or just boat. They warned us that the catamaran rides were known for their nausea-making. We decided to weather the storm because it was a shorter ride, rather than the combination of two bad and longer modes of transportation. As soon as I took a seat, I noticed that in front of each person was a plastic bag; when the gentleman was giving instructions, he held up the bag and rubbed his belly. Clear enough, friend, vomiting passengers is obviously a thing.

I am sat by the Atlantic watching the tide come in; what was formerly dry land when we arrived is now ocean covered. Four horses just walked past me (see one of my Instagram story). There’s no sound here but ocean, and the occasional human voice. Natty and Brian are by the pool, and I will meet them shortly.

When we disembarked from the catamaran, we walked through the island’s ‘downtown’, all shops and restaurants.

About 25 minutes in, walking along the coast, and seeing the zip-line we will try to get to, we arrived at our hotel’s pick-up point and readied for another 25 minute car ride.

Internal transportation in Brazil is not easy, but it is interesting. And the views, always the views, make up for the long hauls.

On this car ride to our Anima Hotel, we drove through the local town, which had its own restaurants and bars for the locals. We were told which of the three or four restaurants had the best pizza on the island; I imagine he was comparing it to all restaurants, including the dozens for tourists.

Small colourful homes are spread out, with surprisingly (for a Canadian girl) large pieces of land attached to most. People either have trucks or those strange little vehicles that are without cover, and which Canadians drive in the winter, through snow. They look like a seado (?), but with big wheels. You should wear a helmet on them, but chances are you don’t.

I found the local school and we had the hospital pointed out to us. Agriculture and tourism are the money-makers here.

But. If Brazilians could bottle kindness, I think they’d make more money than all of their main sources of income combined. I didn’t ask for help from the women or the husband. I just doubled over and started praying. They stepped in, without question, and crossed what in North America would be considered a line or two – like when the woman kept rubbing my back. I can’t imagine too many strangers doing this even if I were curled into the fetal position screaming BUT WHY? on any given street corner in Canada. I am so grateful that they did.

After the woman gave me medicine, I turned my small and very heavy head to smile and thank her husband. I noticed he walked back to return the medicine to another stranger (who they also clearly didn’t know). This is community. And this is what we are often lacking elsewhere.

Though there is severe poverty here, the population is deep-pockets rich in heart and kindness. From this, many of us have much to learn.

Today, I am grateful for:
1. Not having vomited.
2. Brazilian ‘cappuccino’, which is a little coffee, a lot of milk, sugar, and cinnamon. Basically, it’s a party in your face.
3. Always, the ocean.