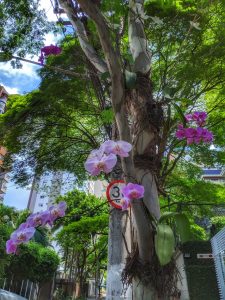 They attach orchids to tree-trunks, so trunks are covered in blossoms. That’s the image you’re seeing above.
Very few people smoke, and the ones who do stand-out.
Mistress culture is a thing.
As equally, ‘love motels’, which are exactly as they sound both due to mistress culture, and young couples both living at home. At these motels, you may rent rooms and / or private parking spots.
All dogs have barrettes.
I want to buy everything in the clothing store windows; all flowing colour and architecture. “I should have brought an empty suitcase and no clothes,” became a daily conversation starter.

I am nearly 2.5 hours into my super duper 27 hour travel extravaganza home, so thought to wrap up some minor bits and bobs from the last two weeks.

First, how clean Brazil is, including every single public washroom whether it is in a mall or on the side of the street. I’ve travelled all over the world and absolutely no other country can compare. Nathalie made an excellent point – when the labour is so cheap, one can afford to keep things clean. Though this is true, it’s the fact that cleanliness is a priority, and so a thing for which labour is pointedly used (cheap or otherwise). There are many many other countries where labour is as cheap, and cheaper – they are not keeping their washrooms and streets anywhere near that of Brazil.

Two, like just mentioned, the streets. I have smelled sewage twice, in the exact same spot, while in Rio. Otherwise, the cleanliness I mention is evident even in the smells of the city. I have smelled three things: (1) nothing; (2) food (such damned excellent smelliness); and, mostly, (3) soap.

Three, I have noted several people working street corners. Not sex workers, but workers such as an upholsterer and a cobbler. Apparently, they move from corner to corner; people see them and bring items down to them for fixing. It’s definitely one way to get business, though such a hustle to keep moving with your gear. It is easy to admire their work, while raising my fist to the system itself.

Finally, but most definitely not least – the astonishing male beauty every single where you look in Brazil. But only if you like dark men with dark hair, and thick eyelashes. They are fkn GORGEOUS here, folks. A history of immigration and mixing – ethnic to Brazil folks plus Lebanese plus Japanese plus different parts of Sub-saharan Africa has made for a stunning male population. As mentioned in one of my stories, the women are far less attractive, at perhaps a ratio of 1 to 30 at the same level of beauty as that of the men. Honestly.

And the ratio of men to women here is, as is the case in Ottawa, also quite imbalanced, to the advantage of men.

Which makes for an awfully skewed dating and relationships world, I am told. And which further emboldens the existing machismo culture.

But really. So much concentrated male pretty here.

My eyes leave Brazil on a very grateful and happy note.

Today, I am grateful for:
1. Hearing Nathalie’s laugh this morning, which I originally thought was a dream.
2. Brian, who went out of his way today to go and find something in which I might safely carry home my work of art. After he found a properly sized cylinder, his engineer self fashioned a sling for me so that I might strap this small monster to my person while travelling. He did all of this on his own, insisting I have coffee and take my time to journal since it is my last day here.
3. Fabio, my Uber driver. He was so fun and funny and he gave me the history of everything we drove past during our 90 minute pilgrimage to the airport.