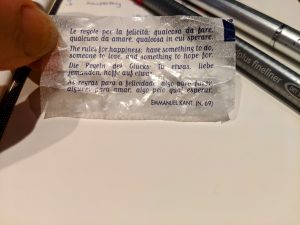 “The rules for happiness: have something to do, someone to love, and something to hope for.” -Kant, who always could.

I have always loved Kant; the only reason I refused the Kantian label in Uni is because I was equally in love with Plato. (Graduate bar, people were big on labels. You know who I loathed? The “sexual socialist.” Like. You want to fuck randomly? Go ahead. Be my guest. Just stop pretending it’s academic; you are see-through.) Anyway. These two men, with their capital ‘truths’ were wildly sexy. Please slide into my DMs and tell me how obnoxious I sound right now, I am absolutely here for it.

Yesterday, having coffee with a friend, and after posting The Hopefuls, my Baci brought me home to Kant, and the reinforcements began. From the high volume of messages which the piece generated, to this kiss from another kiss, all of which further reinforcing what I’ve always believed – when I’ve made the right decision, the Universe conspires to help me move through whatever is next. (**I use the Universe, but I mean Allah.)

Because I’ve never believed in consequences, but rather that every drop and test in dunya are meant to help us elevate. For Believers, that’s the essential goodness of a test, no? Even when we wish to bloody knuckles against syllabus, the whole point is to learn, incorporate, and add the knowledge to our existing cache of more of the same. Which is precisely why we keep receiving the same test in different formats until our dumb ass actually takes away what is meant to be taken away from that particular lesson. And with knowledge, comes elevation, which is why the very first word to my Prophet, Light upon him, was: Read. (Again, this is the perspective of one Believer, so if this framework doesn’t resonate, then I do hope you’ll find the language which your heart needs, in its effort to make it through this hellish world. I will always have you from whatever angle you need to be had, with only care.)

Test, learned; mistake not repeated? Then we move onto the next test. Just like a worldly Mario Bros.

Turning back to the point of this article, which are the two primary conversations generated by yesterday’s piece – first, people asked me how to know which threads of hope to follow, and second, how to let go of hope.

Always, I have to preamble any advice I offer with the caveat that these are my very personal lessons learnt, and that my root, always, is God. He has pulled me out of some fucked up situations in which I have willfully placed myself while ignoring all of the warning signs and red flags. And let me be even more clear – I have stood on the precipice of some wildly unhinged almost-decisions that would make you agog at my singular and laser-focused stupidity; friends, I’ve thrown myself from the ledge on one wing of unhinged mania, and another built of blind** hope only to be ripped back to safety by powers unseen against my own wishes. (**Blind, because like trust, hope is not a thing which we create in a void. Rather it is something which should be earned, and it has to have teeth, I am still learning.)

Sidebar: For you dear seven readers who have lived here since 2004, you know that I have been looking for love in all different dimensions, because right place and wrong time, or correct time and wrong place. The Universe has yet to align, which is where my abundance of hope becomes a problem, and as mentioned before, I am a woman always overflowing with hope. It’s why people like me – I am a ray of goddamned sunshine, goddamn it. Couple these rose-tinted glasses with a refusal to believe in coincidence, but rather a belief that everything happens for a reason, and I am basically standing on a street corner asking every man if he’s My Man. Like a fucking clown. Which makes for excellent poetry collections (is what I keep telling myself).

Anyway. I am so high on caffeine, that I am all over the place today. And very giggly. Turning back to the first question: Which thread of hope do I follow? Not the earthly one, promised by mouths who might be speaking sideways and maybe only looking to serve themselves. Instead, I do my best to follow only those to which my body responds in a state of peace, no anxiety, no worry, no confusion. It took me so many years to learn this lesson, because the drive to be loved makes us easy prey. Because I am the rule, not the exception, of course I too have fallen prey to this for short periods, but really really alhamduliLah, never for long enough to do irreparable damage to my hereafter. This, for me, only by the Grace of God. May He continue to protect me from my sorry self.

Again and again, I remind myself that God’s guidance has been whispered in my belly at every turn. Every time I stop and consider all of the bad decisions I made, as well as those I tried to make, I would be a lying liar who lies if I didn’t acknowledge that I knew I was about to  launch myself into a shit-storm. All of the beloveds I called to talk myself into it. The acrobatics I flipped in my head to justify it. The active and actual nausea I literally pushed down, choking down my decision, lying to myself that this was right, and that it’s what I actually wanted.

Yo. The push to be loved is hella REAL, and it is fascinating the ends to which we will go to have this yearning in us filled. Because the road to hell isn’t paved with good intentions, but it is certainly paved with the promises of love. Which is, to me, the primary demand of the human condition – to be loved, and to be seen. Taking it a step further, I will argue that it is, as reflected in Rumi, a seeking out of Love. The earthly search for Him, found most closely in our receiving, and giving of love to another.

Take from that whatever you need, to find your truth, and now look to the second question: How do we turn from hope?

For me, it’s a triad. I exorcise the hope. I remind myself what is mine, will come to me, and that it will be greater than I might ever imagine, and that which I’ve left behind. And, I actively force my mind to turn itself away from whatever I have to leave behind, and instead to face the architecture of blessings which Allah keeps building for me. As a woman whose downfall is the question BUT WHY?!, it isn’t always as easy as I’ve just made it sound, and the women who have had to pull me together in the past will most certainly attest to this.

As someone who has loved and lost at so many turns, I can make you the promise that even my greatest and heart-shattering hope of over 15 years ago, the one over which I was ready to burn down the world? It passed. As has everything since, and everything to come. And, I imagine, all of them turned into blurs of colour when I finally wake into the next.

All to write – you will be okay. I promise this, and offer it with a gentle reminder from yesterday’s piece that having hope, even when it falls flat on its face, is a reflection that you believe there is more to come. It is the space occupied by God, and it is a part of your greatest love story. Trust.

Part one, The Hopefuls, found here.

One thought on “The Reinforcements”