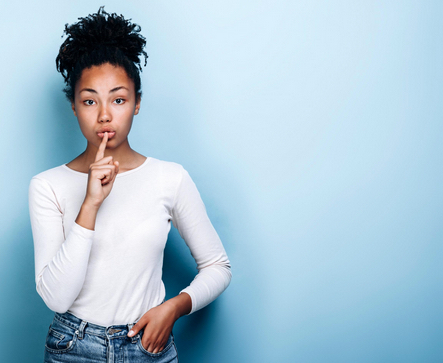 The first time I ever articulated it was in Uni. I remember it so clearly, because it remains a rule by which I live – “Give them your ulcer.”

Even my deen encourages me to use my words, then my pen, and then to pursue Malcolm’s “By any means necessary” guidance, in the event that I am wronged. Macro, when facing collective oppression and hostilities, and micro when between two people, and where the example of my Prophet (s.A.w.s.) lights my way – he never asked a wronged person to keep silent in the name of patience and restraint, or, to use common Western vernacular, to “keep the peace.” Rather, he made certain that the wrongdoing wasn’t just stopped completely, but that the individual wronged in fact defended themselves. While not all of us are able to do so for a variety of reasons, there is no doubt integrity and pride in standing up for ourselves, for knowing and articulating what will and will absolutely not stand. With this, I offer Kuhn’s famous “Dare to stand before those you fear and speak your mind, even if your voice shakes.”

Now. Before I get into all of that, I do need to address this noxious seemingly Western opinion that if someone does A to you, and then you feel B because of it, then to feel B is “your problem.”

If you adhere to any such philosophy of being, then in no uncertain terms: GO. FUCK. YOUR. SELF.

I mean. How did this shit ever take hold in common human interractions? This is not a rhetorical question; if you can justify this lacking-in-character approach to our engagement with others, then please slide into my DMs so that I might know you and block you. What has happened to us that we literally do harm, and then when the individual whom we harmed tells us that they have been harmed, we throw our hands into the air and declare Well, that’s your problem…your feelings are on you…?

I’m sorry. What? I am, as ever plus a day, Confusion. (I’m also really cute, but we’ll talk about that later. Pin in it, thanks.)

It’s what we keep repeating – intention doesn’t matter when harm is caused; if harm is done, then step the fuck up and take care of your damned mess. Meaning, face the consequences of your actions. Be responsible. Take ownership. Dive down with those arrows when that stock drops. Choke on it if you must, when you are wrong, but whatever you do, don’t further erode this already shitty and lacking-in-character movement forward into a world where we declare that nothing matters but us alone, individual. Be responsible to your people, because for the millionth time, dear reader, the respect you show others is a direct reflection of the respect you carry for yourself.

Right. Now let’s turn to the true intention of this piece –

We were sitting on the patio of Oliver’s on an unusually humid summer evening. My hair was Lion King, and I was wearing a gorgeous deep turquoise v-neck (Le Chateau! I wish I had kept you, Boo), shiny black pants (Club Monaco! I am so grateful you’re gone), and black platform boots, because, oh Fashion, you are my favourite lover to hate. One of my friends was complaining about something which she felt was a misstep by another friend. Missteppee was rightly unloading, and in her unloading, the frustration, angst, and pain were extremely palpable. What was equally apparent to me then, but which she denied, was the fear underlying everything she was sharing, because she clearly had no intention of ever broaching the subject with the only other individual worth noting in this entire scenario – the Misstepper.

Not to be confused with gossip or circle-jerking, there is all of the merit in the world to discussing challenging situations with beloveds inside of circles of trust, who will either shoulder our pain in silence, or who will give us the most honest (at the risk of it being very painful, but hopefully gently delivered) advice in our best interest. But. She shouldn’t have only be speaking to us. She should have shared her ulcer with The Misstepper.

Sidebar to my Ummah: Recall that our Prophet, Light upon him, made it clear that reconciling between two people has more reward than voluntary fasting, sadaqh, and prayer.

Why she didn’t is what was reflected sharply inside of her fear – to broach the conversation about this one particular moment would inevitably force a greater conversation about all of the other million cuts sitting in wait between these two friends. All of them swallowed. All of them ignored. Not one of them ever vanished (nor having the intention to do so, because that’s just not how human psychology works when one is oppressed/wronged and quiet about it. Please return to above note about how the Prophet especially encouraged the wronged to actively defend themselves).

Eventually, the Universe forced their hands, and the conversation had, with a million paper-cuts pointed out on each body. It was a mess for a short while, but then it was not, because as with all things, every thing is indeed temporary. The discomfort, the love, the kindness, the hate – all of it has its timely ebb, and then flow into new (and greater things, of this belief I am forever convinced and will take it to my grave).

Did they stay friends? That’s not relevant.

What’s relevant is the nod to honesty when initiating such a conversation. The respect we have for ourselves, and those before us when we say, and then act on I care about you too much to let this fester. Let’s talk.

Always, I remind myself to speak up. In some cases, and with certain people, it’s far easier than with others. It is an absolute terror for me to do so when it’s with someone whom I fear losing, but I get there. When I feel that fear – the kind that feels as though it will upend and overturn my entire life (it never has, alhamduliLah), I remind myself that dunya is not about comfort, but rather it is about how I carry myself, the respect and care I show those standing on the line of horizon alongside me, and my little attempts to more-often-than-not remain on His straight path. inshAllah.

25 years ago, “Give them your ulcer” was meant to be as cutting as it reads. Today, it’s no longer about the cut, but more so the gentleness of taking care of ourselves, while equally extending the kindness of honesty to others, no matter how difficult and uncomfortable it might be to do so. So, I think today, there’s a pivot from there, to: “Don’t let the acid stick around long enough to create the fucking ulcer.”