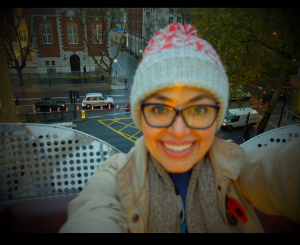 2015, November 18 was when it had last happened, moments before I took this photo on a Ferris wheel in London’s Marylebone neighbourhood. And only once before, in 2009 while riding Lulu in the Experimental Farm.

These, the only words I can use to describe it. It’s a near paralyzing feeling of pure and unadulterated joy which used to arrive quietly in one wave, flooding my body to the point where I have to stop moving. Because if I don’t, then I will absolutely start crying. Always, I’ve been in public, and sobbing isn’t entirely an option, so every ounce of energy is directed at breathing through it, to avoid breaking into an avalanche of tears.

There are neither immediate triggers, nor warning. Once, in a farm; second, standing in line at a Ferris wheel; third, in a Winners; and, fourth, much to my surprise, whilst walking down the street in Berlin recently, next to Sabina (which is when I discovered that I can also talk my way through it to avoid the crying, if I have someone next to me whom I trust).

While there are no immediate triggers, these events have occurred post launch into sorrow. My circumstance leading up to, and moving away from these moments had me navigating loss. I’m not certain if I’d experience these times without loss, but that’s really neither here nor there because the moments exist independent of their Why. (Though perhaps on another day, I might consider that I am grateful for the losses, as they somehow contributed directly to these experiences. Alternatively, as I grow, I’m much happier in quiet balance, and so would have equally been grateful for neither sorrow nor euphoria if both were to be replaced with peaceful and level expressions of emotion.)

During my 2019 sabbatical, after the ugliest of heart-traumas, I yearned for this moment. Somehow, I needed proof once more that I still possessed the ability to feel such deep and unadulterated joy for simply Being. I was on its precipice a handful of times, but always, the end was short of the jump.

Until June 15th, 2021. Two years, I waited, and the Universe did not disappoint. I was in Winners, a euphoria itself. At least four waves of it; a first to have it so prolonged. I left the store and let myself cry (later to return and purchase more candles, as is delineated in Qur’an 25:117).

I have only ever mentioned this to three others, two of whom said they had never experienced it. I hope they do, if only once across their span. Of all my memories which are blurred, I remember these particular spaces occupied with the sharpest of clarity. More telling still, is that I do not remember the sorrow leading up to, and away from them, which is possibly the Universe’s way of reminding us that the best memories serve to heal, not harm. Just like the best people.

May we all be surrounded by only this grace of both energy and humanity.