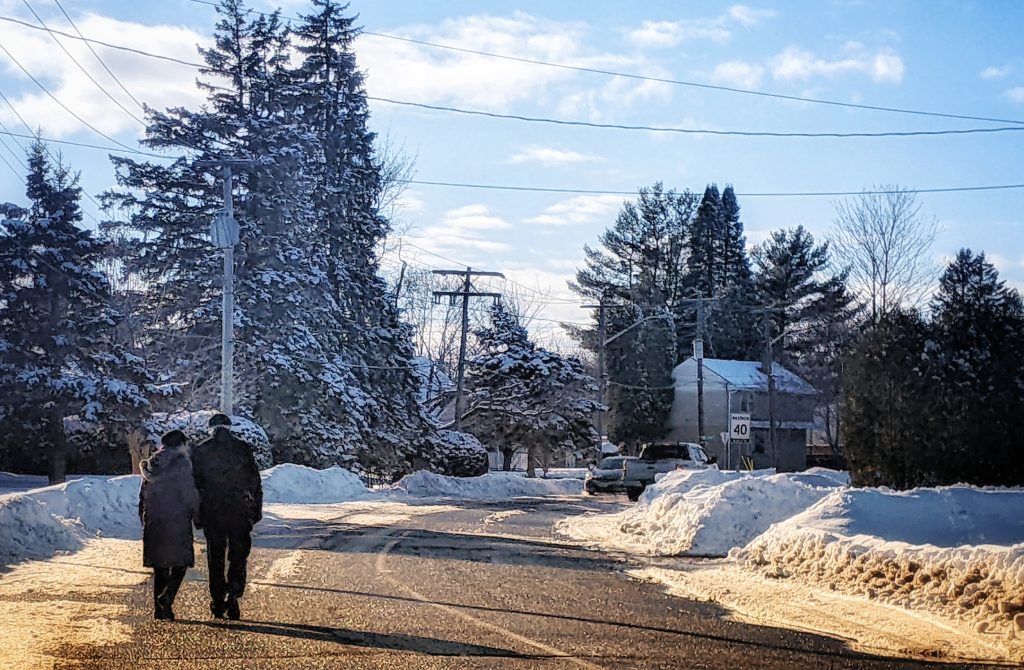 “Do your little bit of good where you are; its those little bits of good put together that overwhelm the world.” -Desmond Tutu

That’s Therese on the left, and her husband Aquelina on the right.

I hadn’t intended on going for a walk on this particular day, because there’s generally two times I hate walking – when it’s oppressively sunny in Winter, and when it’s pouring rain any time at all. For those unaware, Sunshine + Winter = Freezing temperatures, as equally as Grey Skies + Snow = Warmer temperatures. After a beautiful snowstorm the night before, we woke up to the sun showing off all of its brightest rays. Like the vampire that I can often be, I kept the blinds at half-mast in an attempt to avoid it.

Later in the afternoon, after the clouds had set in comfortably, I decided it was best to get some fresh air amidst the hellish news of this world. Clear matters a little bit, and get my body moving as I attempt daily.

A little over halfway through my walk, I saw these two ahead struggling to cross some very poorly cleared sidewalks. Their choices were to either climb a small hillscape of snow, and rock, or half-glide, half-swim their way through the full-of-hate puddles of sleet and melted garbage.

I sped up to help them get across the area by which they were walking. Therese held onto my arm and kept holding for over 2 km, and approximately 45 minutes. Every once in a while, I would make sure to offer my arm to Aquelina over the sludgier street parts.

Therese is 90, and Aquelina is 91. They have three children, and six grandchildren, all of whom live around them. They too had not intended to go for a walk, but when the winds died and the sun took a seat, they decided to also get some fresh air.

I was completely derailed from my intended route. I didn’t get my errands sorted. I was out longer than I anticipated or planned. And for every single one of these derailments, I have not been more grateful than I was on this day, for both the care and conversation, and most certainly for holding hands with Therese, whose tight grip I reluctantly handed back to Aquelina after making certain they safely crossed a far too busy street to get to their home.

Our chat covered the entire spectrum of topics, ranging our individual immigration stories, the work from which Aquelina retired, how the current strategic wars might play themselves out, renewable sources of energy, and the vacation which one of their sons intends to make very soon. They invited me in for coffee, but because I did have a schedule to which I eventually had to return, and from which I was already undone, I couldn’t accept.

That written, I plan on taking over some cake in future, just to say hello and thank them for the walk, inshAllah.

Often, we hear Look for the helpers. Too little, we consider how those whom we help in fact enrich the lives of those who might be helping. In a dunya which increasingly feels as though it is fast eroding from all care, we are well to remember this lesson as we move forward.