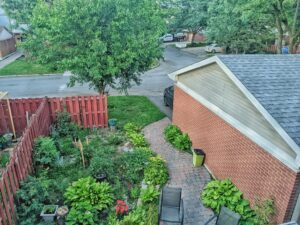 The robin landed unusually close as I stood outside, and she** didn’t fly away when I approached. Rather, she hopped along, signaling an inability to fly.

Injured foot, or an injured wing, perhaps; I followed her quietly around the front garden, considering how I might help. Either of these possibilities, if YouTube couldn’t show me how, then I’d take her to a veterinarian.

Until today, I’d never held a bird, but rather only watched as good people in documentaries taught me how.

I asked mum to keep an eye on my robin while I grabbed gloves. I’d tried to hold her without gloves, but my body rejected the feeling of her wings press against my hands, seeking leave, while I denied it. Psychologically, I needed a barrier. (Make of that what you will, pop-psychologists.)

I was hesitant. Not because it was a first, but because birds are so small and fragile, and though my robin didn’t put up any sort of real fight, I was worried I’d hold on too tightly. (#StoryOfMyLife) I didn’t, alhamduliLah. If you’re curious to know what it felt like, carrying her, it was like carrying several empty eggshells.

Momma had brought over some water and so I slowly placed the very end of her beak into the cup so she might drink. Very very slowly, I think maybe she did. I couldn’t tell if she were taking small gulps, or just moving her beak.

After a little, she began opening her beak a little more, and because she wasn’t trying to fly away, I instantly thought This is what happens when someone is dying – they have one final burst of life, before leaving.

Which is exactly what happened.

One moment, I felt her heart beating, and then I didn’t. Her small and beautiful head suddenly softer along the neck, I began to cry.

Until today, I’d never felt a life leave a body.

I struggle still to wrap my mind around death. We are here; we are not. I don’t understand it, nor do I believe that I need to. I’ll address it when I must; first, when I have to wash and bury my own, and then fully when the veil is lifted, and the answers show themselves. Until then, and as days rush forward, it’s a shade of understanding I try to avoid, because my body is too heavy to turn itself in that direction.

I understand it’s life – death is the most certain and absolutely inevitable truth. There is no other. But still, I was hoping to nurse her back, and to know her a little longer. I’d even asked mum to bring me some food, and we had set out two saucers for her – water, seeds.

I held her for a lot longer than I needed to, but I wanted to make certain she was gone before giving her body a little place of safety from other animals.

After I’d placed her quietly beneath momma’s mulberry tree, I went upstairs to work at my desk against the window the view of which is the above photo. I watched as another robin came to investigate momma’s garden, maybe looking for their friend.

Until today, I hadn’t realized how deeply I believed that there is so much intention and purpose in every detail and fold of our lives, that my only role in my robin’s life was to make sure she didn’t die alone.

**Female robins are, for those curious, distinguishable from male robins primarily by the colour of their breasts; more rust and orange, and less bright red is the female.