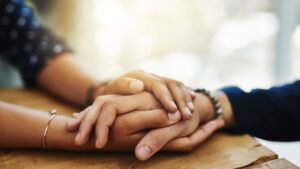 You can’t love a friend enough to do their work for them.

You can’t love a friend enough to heal them on their behalf.

And you most certainly can’t care about someone more than they’re willing to care about themselves.

Undoubtedly not in the early days of friendship, and sometimes not even in the winter of a relationship.

There are crosses we bear when in love with someone after years of relationshiping. Once a lover with anxiety, now he’s the father of your children whose developed debilitating mental health challenges; your teenage cousin who used to smoke weed is now shooting heroin between his toes as a man in his 20s; your life-long best friend’s ‘partying’, results in a drunk driving accident in his 30s. For them, we provide all of the care and support they need as they do the work to shift.

Because that’s the caveat – that they are the ones doing the work, and seeking healing while you play a supportive role in their life.

Driven primarily by the beliefs that individuals are able to change, and that everyone struggles and so we are all deserving of care and support in that journey, I go out of my way to make sure I’m there every time a beloved needs me to be there, in any form that they might require of me. Through much error, I have learned that I can only do this if their behaviour isn’t harming my own nervous system. A distinction here between my feeling sadness to see a beloved struggle (not harming my nervous system), and that same individual’s poor behaviour directed at me, causing me harm.

Sidebar 1: Once upon a time I became very shortly and quickity-split involved with a man who struggled with extreme mental health challenges. Except you’d never guess by his life – a professor, a venture capitalist, a health nut, absolutely gorgeous and hilarious, brilliant in so many areas (but not all, though he believed he was). From the outside, a proper almost dream. He said one right unprovoked mean thing to me, and I flagged it. The second time he behaved in similar fashion, I bounced. Because all studies confirm that while women with mental health challenges self-harm, men inflict harm on others. Mostly, on their immediate and direct family. He already had one divorce behind him, and I began hearing stories of how he spoke to his friends – MEAN. Like cutting, harmful, awful things. I was not interested in hanging around to see how many verbal beatings my heart could take.

Sidebar 2: Here it’s also important to mention that the caretaker role is how young girls are raised, and socialized. We are taught the lie that the maintenance of social order lands primarily on the sacrifices we’re willing to make, and the shit we’re willing to take, no matter that they often result in our complete depletion if not death (here also see how stress alters female DNA and causes disease). A necessary reminder – It is not your responsibility to ice the fists which beat you.

Only once have I had to actively remove myself from being a soft landing for someone, and that situation is one about which I’ve written before – they were in a cycle of abuse. Every time they stepped outside of that cycle, I was there to provide support and care. After the 5th cycle, I realized that I was doing more harm than good because by providing care and a soft landing, I was in fact blocking repercussions. Essentially, I was handing a knife to someone I loved dearly, and saying ‘Go ahead and cut of yourself as much as you need to; I will patch you up as often as is necessary.’

But. They needed to bleed out, because it was the only way that their instinct to survive would kick in. (Rock bottom is more a blessing than we give it credit. More on this in the next article, inshAllah.) And kick in it did, because there was no sixth cycle. To centre myself in the pain of another for a moment, let me assure you that this was one of the most painful things I had done because my entire instinct is to constantly and unyieldingly provide care. Add to this that in these circumstances I struggle with guilt, wondering if God needs me to be stronger so that I might bear the weight of another’s pain.

I don’t. None of us must. Though we are able to choose, depending on history and the nature of our relationship.

I have loved people through childhood sexual abuse. Childhood physical abuse. Adult addiction. Physically and emotionally abusive adult relationships. Mental health challenges. And any combination thereof. Sometimes, they were doing more work than I was, because they loved themselves enough to seek change. Sometimes, I was following their lead, because they loved themselves enough to seek change. I’d have begun these last two sentences with ‘Naturally‘, but the truth is that self-loathing and shame are the intersection at which such matters usually build their homes, and so ‘naturally’ is the antithesis of where most find themselves until that rock bottom shoots up to break their back and force their hand.

Which is how I learned that Sometimes isn’t enough. I couldn’t be doing more work than them, and I certainly couldn’t be leading them (unless staging a proper intervention, which was only necessary once). When I wasn’t following their lead, and when I was loving them more than they loved themselves, we both failed. Left with my own healing to which I had to then tend, I learned that I couldn’t do the work for them. As devastating as it was, I couldn’t – through the amount of love I showed them – teach them to love themselves enough. Because though it is the most critical one, self-love is also the most challenging love story any of us live.

To the caretakers, then – I see you. And I’m here to remind you that it’s okay to walk away from those who have long ago walked away from themselves. Put down the guilt; your hands carry the weight of responsibility for yourself and that is struggle enough.