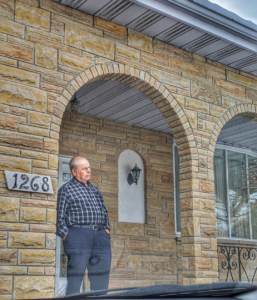 Two great losses in the span of six days. Neither expected. One with whom I grew up, and the other whom I had hoped to watch grow into an extraordinary young man. The latter, I don’t think I will ever be able to write about because the grief is too large. Too deep. There is a space now in dunya which I can neither comprehend nor look at for too long. The mere thought of it has thrown me into nausea for the last two weeks.

Resting in peace are they both, the little now certainly an angel.

This is Mr. Vena on February 23rd, 2020. I was pulling away from theirs after an afternoon of far too much food and laughter. He tried to convince me that little Italian donuts are called: Balls. He walked me out, told me to get myself an Italian husband, and waited for me to pull away. As always, he waved before I turned into the street.

I don’t generally take photos like this, but it felt appropriate to remember how I always knew him. Especially since I’d not sat across from him in nearly two decades. I had realized how much I missed him, and so I took a photo.

It was the last time I saw him.

Growing up, I was at Mr. and Mrs. Vena’s nearly nightly. Most certainly, every weekend. They were down the street from mum and I with a large basement and so Nadia and I would stay there. Or at Tim Horton’s. Or at the little store where she worked. I was the one with a car and so drove us everywhere.

I was also the one with the crush on her older brother, and she always made fun of me for it. I, equally, her love of Bruce Springsteen.

Mr. and Mrs. Vena were a staple of my high school years. They informed my upbringing with their kindness and generosity. She always had Italian food at the ready for us, and he, some new joke. And, a voice so distinct, it will forever remain unmatched.

Nadia still does the perfect impression of his voice.

In the years since she and I grew into different directions (and found one another again a little over four years ago), I saw Mr. Vena fairly regularly as I drove along the street where their home sits. Our neighborhood is still the same, this a blessing in itself.

Always, he was outside. And always, I would quickly honk twice and he’d lift his arm like a lever to acknowledge his audience. He never did look up. But he did smile.

I had disconnected from my phone network and turned off all services because I was flying. In mid-flight, Nadia’s message came through anyway. It was the only one that did, and I couldn’t respond because my services were off. I keep returning to her message to check the timestamp, because her message shouldn’t have come in.

She was telling me about Mr. Vena’s passing, because she knew how much I had hoped to see him again. Just two weeks prior, her and I had seen one another and talked about another visit to her parent’s.

She was the one consoling me when I dissolved into tears at the wake.

He is the first parent lost to my generation. To my circle. I don’t imagine it will ever get easier.

I didn’t know how much I’d missed your voice until now. Thank you for taking such care with me, always. I love you, Mr. V.