The Being Better, But How? 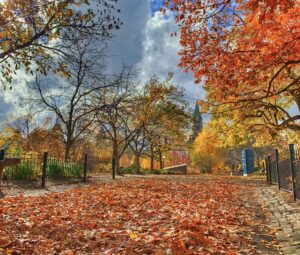 She’s really a sight during Autumn, isn’t she?

For some time, I’ve been trying to figure out how to be a better Muslim. What more can I do, in which direction should I shift? I’ve been researching this, like a proper project. Below is what I’ve learned.

To understand the answer, I have to present some foundational information. In Islam there are three different tiers to being a Muslim (I am not including what some Sufis might consider ‘sages’, as I am not well versed enough regarding this very specific and particular-to-Sufis elevated Muslim) –

First, is the old-fashioned plain donut ‘Muslim’, identified purely by their declaration of the shahadah. It is through the stating of the shahadah which one converts to this deen, and the shahada is simply: There is no god but God, and his final Prophet is Muhammad. Since there’s no ex-communication within Islam, then every single shahada-stipulating-even-if-not-practicing-anything Muslim is just that – a ‘Muslim’.

The second is an old-fashioned glazed donut, which is a ‘Mu’min’. This is someone who has declared the shahada and who, to the best of their ability, follows the deen’s commandments. I’d like to believe that I fall into this category, and I hope Allah forgives me if this is a false and arrogant claim.

The third isn’t a donut one eats, but rather a truckload of donuts which one purchases in order to donate to all who need donuts. It is the Muhsin, who has declared the shahada, follows the deen’s commandments, and pursues the elevation of and support to others. It is someone who uses their time in dunya to create spaces of generosity, kindness, and safety for others.

The trajectory of the above three lends itself naturally to the fact, then, that to be a better Muslim (/human), one has to pursue the elevation of and support to others. Saddaqa is the Arabic word for the very specific means through which this is achieved.

“Sadaqa is charity given voluntarily in order to please God.

Sadaqa also describes a voluntary charitable act towards others, whether through generosity, love, compassion or faith. These acts are not necessarily physical or monetary. Simple good deeds such as a smile, or a helping hand, are seen as acts of sadaqa.

Anyone can give sadaqa for any amount. Some of the companions of the Prophet (peace be upon him) were incredibly generous in giving sadaqa, often giving away large portions of their wealth and keeping only enough to meet their needs. A good balance for us may be to divide our wealth between that which we need, savings and sadaqa.” (Source: Islamic Relief, which is one of the organizations to which I donate regularly, and whom I encourage you to peek).

Doesn’t seem so hard, does it? Which is another way of writing that it is something facile to pursue, and I’m reminding myself, and encouraging you to pursue it. We have nothing to lose, and el-aakhirah to gain inshAllah.