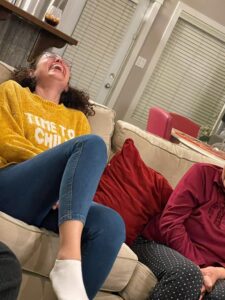 The past year has been full of beginnings for me, after a decade of challenge; this photo was taken on my birthday when I was surrounded by my family, and immersed in pure joy.

Nearly 1.5 decades ago, before what I have come to call The Trauma Decade, Maxi coined a particular behaviour of mine The Shut-Off Valve (about which I have written in the past). It’s how I used to deal with people who did harm – either to myself or to others. Platonic and other, if someone was a POS, I shut them down and punted them right out of my world quickly, and without hesitation. He called it the shut-off valve because of how swiftly I did it, with neither residual sadness nor a second-guess.

Over the last decade, I had swung in the exact opposite direction. I saw it as a softening of my asshole tendency to judge people without giving them the room to make mistakes from which they might pivot and grow. Again, both romantic situations and purely platonic ones. As is my nature, I exercised this new position in an extreme manner – I allowed people to commit repeated harm and I made 70 excuses for them. “You never know what someone is going through!,” my mind would demand. Except, when you break a fucking plate, even if you stand above it and sob But I didn’t MEAN to break the plate, the plate is still fucking broken, innit? And while we’re at it – I have learned that some people will always assume that your intention was to break the plate even while the plate is still safely and securely in your hands, and these people are the actual worst, because they are insidious. And absolutely fucking exhausting because they are always at the epicenter of your world, demanding apologies. Trust me when I tell you that they should be the first to go.

Back to The Trauma Decade. I would, over and over, step into an actual pile of shit with a shovel and the ambition to find that one possible maybe potential nugget of kindness and hope in their behaviour. Three particular and extraordinary women have stood by agog watching me do this, trying to wrangle the shovel from my hand. Which I have not allowed until this year. Because let me assure you of what they already knew – the only thing my behaviour did was cover me in shit, and afford the room to others to continue exercising bad behaviour after they noticed they could get away with it.

In 2019, I shifted. But only with men. Un-learning and re-learning is no easy measure, made even harder when you have a personality such as mine which takes ownership in the shit behaviour of others and always stops to ask – What did I do to contribute? (Because the guilt of that answer – warranted or otherwise – creates the space for an excuse. And in that space, I used to remain in the relationship.) Slowly, I rebuilt my boundaries; and with each brick, the Universe presented me with choices wherein I got to exercise and implement, until April of this year, when I was afforded the opportunity to pick up the last brick. Well earned by the man in question, I gently turned to The Shut-Off Valve and left him winded.

I was sitting across from A a couple of days ago when she said But you still haven’t completely done this same thing with the women in your life. Your friendships.

Increasingly over the course of the pandemic, the Universe has kept pulling my eyes toward this reality, and I have been paying attention. Because while the Universe has never misled me, I certainly ignored it’s guidance on one too many an occasion during The Trauma Decade. While we often discuss attachment theory as the primary way we build in romantic relationships, it is equally relevant to how we engage our platonic ones as well. Which means that the shift I exercised in romance, I am once again exercising with friendships.

I have repeatedly written that we can (though we should not) ignore a paper-cut, but with enough of them, we will bleed out. Friendships are certainly not outside of this truth, and it’s okay to let their season come to an end. It doesn’t have to happen after a big and inevitably painful conversation (1) it can, if you feel a need to do this, but you are not obligated to do so. The only obligation you have is to ensure that as some continue to carry a bloodied paper in hand, you stand far back enough that they can’t reach you ever again.

Welcome back, The Shut-Off Valve; my well-being has certainly missed you.

(1) Which is how The Shut-Off Valve has evolved; I used to need the painful conversation. Now I prefer a fade, because having a conversation of this kind is a massive emotional demand which I am no longer interested in affording anyone. (See that? That’s another boundary.)