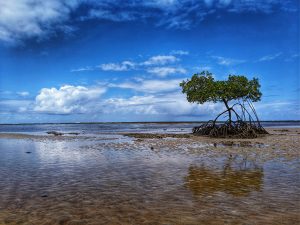 We spent near five hours walking along the coastline from our beach to the public beaches and this island’s downtown core.

Oil spill in certain areas, a heartbreaking testament to how shitty and careless humans really are. The spill happened approximately one month ago, but we’ve not heard about it because the Brazilian government had kept things as tightly under wraps as possible. It has travelled too far down the coastline to keep it a secret anymore.

No one is taking responsibility and so there’s not any info yet re how much oil has been spilled. But enough that a month later, it had made it’s way down here from the North.

Venezuela blames Brazil. Brazil blames Venezuela. Either way, the result is the same. I imagine that all of the wildlife we saw today will soon be dead. Keep your eye on news.

The tide goes out quite a bit, with at least a couple of kilometers of flat-lands becoming far more accessible during the early hours. When the tide is out and you’re facing the ocean, the land is shockingly stark and bare because of course it is, it’s ocean. But still, when you’re standing looking at it, and are able to walk across it, it feels like a skeleton. Turn 180 degrees and you are facing the most lushious and dense (in appearance, but not reality) mangrove, the Bahia Coastal Forest region, a part of the greater Atlantic Forest region. (Thanks, Google!)

In appearance, but not in reality because here’s the deforestation of the Southern Bahia region starting at 1945, to 1960, 1974, and finally, 1990 (Source: The NY Botanical Garden at nybg.org) –

Brazilians travel internally extensively, it seems. They also opt for as much plastic surgery as they do travel.

The body shape of choice here is a very very tiny waste, and smallish (by comparison to North America) implants, with unnaturally and disproportionate ass and thigh injections. The kind that usually, and often result in holes in your skin. (Google: Miss BumBum Andressa holes Brazil).

I have loved the food. There’s heat, and actual flavour. They use a lot of lime, cardamom, and cilantro. I tried their Kit Kat and it was sweeter than North America’s, so tastier. They also have a Ruffles flavour unusual to North America – there’s no English word for it (of which I know, I am not Merriam) but rather only a description. It’s the flavour of the part of a steak that is smokiest and fat drenched.

In unrelated news, I also touched a jellyfish, a sea anemone, and a sea urchin for the first time. Welcome to Travels With Brian And Natty. Jellyfish feel like you are rubbing soap in your hands, but when you take your hand away, there’s no evident soapiness or residue (that written, please don’t then put your hand in your eye). Sea urchins feel like pieces of wood. And anemones are the weirdest; as soon as you touch their tentacles, they make a slight suctioning onto your skin until you pull back. They don’t harm you, but they certainly creep youtf out.

Finally, space. We take personal space very much for granted in North America. Especially in Canada. Here, in Brazil, it’s a distinctly different experience. People will be RIGHT UP AGAINST YOU (male and female) and it’s not an issue. So Canadian of me, I have been the one to turn and apologise to the rubber-up-against while making weird shocked eyebrows at them.

Today, I am grateful for:
1. Having just discovered Instagram stories. I can’t believe I haven’t been documenting this entire sabbatical. Boo hiss me. I realise how different my vibe is in video than the written word.
2. Listening to Natty and Brian play cards against one another. It is, really, one of the funniest and cutest things.
3. Tonight’s moon. Which I though was a volcano. Forget that it was across the ocean and…well, ocean…but it was bright bright orange and deep red, like actual lava. None of us have ever seen such a moon. Is something happening? Are we blood mooning without our knowledge?