the Prolific Immigrant (me) 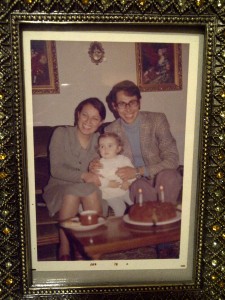 As starting point, I would like to introduce you to the lunatic + lovely coupling which brought forth yours truly. I stood a small and already confused person between them. Yes, Arabs and Muslims often come in different shades than brown / terrorist.

This photo was taken well before these two stopped procreating forever and ever eternal and divorced, ensuring that the weight of their worlds rested squarely upon my lone and no-longer blond head. Thanks mum and dad; you’re nice.

Look at how happy and somewhat menacing these two people are; as though they’ve never had their photo taken before.** Or they were the first to procreate a small person. Upon closer inspection of the photo, I am clearly scared rather than confused. They are gorgeous, aren’t they? (**Also, I am kidding — Arabs know what a camera is.)

As those who read me on the regular already know, I have for the past while been searching for a common denominator through my writing, a place where I would comfortably park myself for time to come, a place in which this now seven year-old internets home may flourish and behave as the histrionic comedienne it was meant to be.

As I am painfully dense, this endeavor left me struggling for weeks until earlier today, when it finally sank in to just write what I know already (which is what everyone and their mother had previously advised).

A few days back, I thought I had arrived at Humour, in fact, but knew by the itch it left that something was missing still: a specificity to my writing.

Not only does the Prolific Immigrant leave no room for vague, it feeeeels 100% right.

My family came to Canada when I was aged four and still v v malleable to my parents’ will. We are Muslim, Palestinian, and I was born in Libya. Essentially, my identity is where all Axis of Evil points converge.

“Canadian” is how I have always identified. (POUTINE!! CALL ME!!) Only recently — not as begrudgingly as one might think — I accepted with open arms that though this remains the predominant character to my identity, it is by no means the only.

In reality I am all things Palestinian, Canadian, Muslim, female, liberal, and often: v v dumb.

Henceforth, predominant (not all) pieces here shall be love letters to my identity; the beauty of it, the challenges it has wrought upon my life, and the strength of character and pride which it has forced upon me even when I didn’t want it (and while I may still sometimes attempt to punch it in its hair).

Though it doesn’t take much for me to reach it, I trust that you are as excited by this new direction as I am.

7 thoughts on “the Prolific Immigrant (me)”