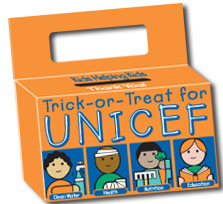 .1. The very first time I carried a UNICEF box, I was mesmerized by it. Proportionally, I was about the same size as the box itself, only it was — unlike myself — v bright orange. This way, when children carried it while trick or treating, people would see it and not run them over.

Do you remember the UNICEF boxes?

The first time I received it, I was staring at it hard enough to walk right past the Principal’s office and directly into an adjacent wall. (Hold on to something too tightly. Fixate on it. Crash and burn. Let this be a lesson to all of us, beautiful readers.)

Sad monkey, I crushed my very first UNICEF box and forced my mom to tape it back together. She didn’t do the most bang-up job because as I walked around the neighborhood with my crooked tiara, wand and ballet outfit, I leaked pennies.

.2. Without argument, I made the world’s most pathetic paper Christmas tree.

Whereas all other trees were perfectly defined and color coordinated , mine looked like I’d thrown up all over a small piece of green paper awkwardly ripped apart.

I tried to hide it from my teacher, but she was a sadist and so grabbed it from my small hands and pinned it much too high on the wall for me to reach.

I distinctly remember being filled with rage that my tree was so ugly, while all others were so beautiful and perfect. Envy you were my teddybear bedfellow.

Inconsolable for the rest of the season, I’d stare up at my fkd up Christmas tree and cut my teacher with my small eyes whenever she had her back turned.

Though I willed it to either burn or fall, neither happened. Eventually, she replaced it with my equally fkd up rendition of the Easter Bunny: a donkey with a round tail.

.3. I was very proud to learn that many French and Spanish words have Arabic roots. (i.e. The French pantalon is rooted in the Arabic bantaloon.).

For the rest of the year I told anyone who would listen that Arabs taught the French and Spaniards their respective languages. I also lied and told everyone that I was fluent in French and Spanish, because I was Arabic and genetically predisposed to speaking these two languages.

.4. Kabala wasn’t “hot” yet and Madonna was still a virgin, but I, yes I, your blog mistress, wore a red string. And not just any red string, but rather: a red string. Around my head.

I loved that red string hard.

Seven years old, I thought how if Olivia Newton John had been graced with a red string, she too would have tied it really tightly around her forehead and made a pretty extravagant bowtie in the back.

I was too stupid to note that I wore it so tightly, I often couldn’t blink. An acceptable consequence of wanting to look Asian.

How no one thought it proper to hold me back a grade or a few remains beyond me.