On the audacity of having an opinion 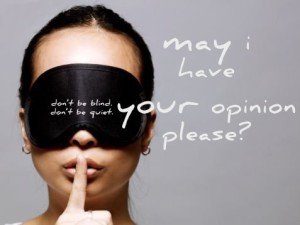 I was recently reminded that once upon an ex friendship, I was told that I have opinions. Stop laughing.

The intention of his statement was clear and it was anything but a compliment. The context? He said it shortly after not being able to meet my points. Meaning, during the course of our conversation, he couldn’t go toe-to-toe with me on any of the subject matters he pulled out of his hat and so decided to passively aggressively insult me instead.

Here’s the thing. There is nothing I love more than a verbal sparring match (though rarely engage one in writing because I do not believe that emotional intelligence can be displayed as strongly in the written word under such circumstances. And to have any kind of a sparring match, it is best to do so face-to-face. People are forced to be respectful when you are making eye contact. And the ones who wouldn’t be are of no value to any conversation. Simple).

He made this statement with the underpinning whinge of why must you always share your opinion, when you can just sit there and look pretty instead? Also, maybe lose a little more weight since a woman should not take up so much space in body either. It took all out of me not to pinch their nose and ask if their silly little self wanted a tit on which to suck because “cootchy cootchy cooooooo“.

What better place to answer this Q than here, right? But first…

My immediate circle of friends are of a very specific caliber; almost all of them are university professors, journalists, union leaders, political activists, writers, artists, each intellectual powerhouses in their own respective fields. Sit 10 of us around a table and while we’ll often start about the latest films, most recently discovered music and the hottest actors with the shapeliest bottoms and nicest forearms, you’ll eventually hear the conversation shift to the why of an experience, the psychology of a situation and someone’s behaviour within it, and then inevitably, we will firmly place the rest of the evening into theoretical discussions bringing to light 10 different opinions running the spectrum of wildly opposite to mildly complimentary. Each one respectfully stated, but backed with thought, consideration, qualitative data and, where possible, quantitative results from studies about the variety of fields which we hold dearest.

When there is disagreement, it is entirely fierce and hard and direct, but always always always with the implicit understanding that we are not challenging the person before us, but rather the opinion. Meaning, when one of these broads passionately near yells “that’s FOOLISHNESS”, the other broad understands that “that” is not her, but rather the statement which she just made and shared for both challenge and consideration.

Each of us has hot-spots. Mine are Islam and Zionism as neither one I can discuss entirely in the abstract because they translate directly on both my person and my family. Another of us, her trigger is sexual assault. A third, Native / Aboriginal issues. Knowing these landmines exist, we do not discuss these subjects but in far gentler manner or only the points on which we might begin from a place of agreement. If a third party enters the conversation without knowing where these landmines are hidden, we inform them immediately once conversation begins that no one is body-checked for not knowing about the trigger (though we do expect people to mind read, such is our standard said the tongue to the cheek and the eyebrow to the hairline).

At no point is anyone’s opinion dismissed or belittled, and at absolutely no point ever do any of these women feel threatened when challenged, because their sense of security stems not from an opinion either reinforced or ultimately changed, but rather from their unshakable core premised on an awareness of who they are and what they bring to the table. If their opinion is challenged well, they see it as a learning opportunity to broaden their awareness.

Side note: The men in our lives who have lasted in any capacity meet us toe-to-toe and also stand with shoulders aligned to our own when other people engage. Ego is checked and it is always always sexy. A man worth his salt isn’t interested in silencing any woman, isn’t scared of her brain. Instead, he is (as he should be) inclined to be with a woman whose intellect he can meet and vice versa. Also, don’t forget about the crayons and playing Twister and watching Saturday morning cartoons before you have your Saturday morning dance party because intellectual sparring should only be one slice of the good time had with a lover.

Back to these women who, before opening their faces, they have thought about the subject matter, weighted it in-line with their world view – a world view devoid of a “brand” according to what makes them likeable (to others), but based instead on their integrity of behaviour, reflected daily in their actions.

Some of you may wish to hear that most of us only speak up when explicitly asked to do so and only on subjects which are ‘mild’. Except, such a statement would only make me a liar propping up constructs of women primarily created and then further reinforced by a male-led view. A view which, if you hold, then you should probably reconsider on some level or perhaps 93.

These women and women like them, myself included I hope, we don’t circle-jerk opinions with the sole intention of rocking the boat or hearing ourselves speak (we have sites for such needs). Rather, and to answer the original Q of ‘why must you always share your opinion, when you can just sit there and look pretty instead?‘, it is because we are informed, interested and involved in the exchange of ideas. That’s why.

Very sincerely and to help you out in such awkward and difficult moments – if you don’t want to hear a well thought out and informed opinion, then please don’t raise the subject. Rather, consider just sitting there and looking pretty instead, little boys (and sadly, possibly worse, little girls).

———-
PS Further to the shithead constructs of fe/male roles, pop over to Elle Beaver for a little schooling.

19 thoughts on “On the audacity of having an opinion”