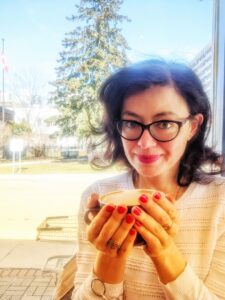 I believe this filter might be called Jaundiced. Also, it has been three months since I sliced and diced my hair. Like, how short was it, if this is three months worth of growth and I am Chia Pet? LISTEN. If ever I come to you with the consideration that I might cut my hair, please lock me in a basement until the fever passes, thanks.

Preamble: The pain I discuss below is about emotional, and personal one-on-one paper cuts. It is not about the trauma of abuse, nor is it about the violence of systemic racism, or any intersecting sickness of ‘ism’ and/or ‘ic’. Meaning, I’m not going to create a space of safety for some POS in a KKK hood.

Now that that’s out of the way.

I once wrote It is never too late to re(-right)write the story.

And always, Red reminds me to be grateful for the passage of time.

A situation from years ago, and I was recently presented with the choice to respond to it with extremely warranted retaliatory damage, or to instead choose patience, understanding, and kindness. Had I chosen the former, not one of my beloveds would have faulted me; possibly, they would have encouraged it, in fact. But, as those of you who have lived here long enough might have already guessed, I chose the latter.

Some days before, I had been sitting, reflecting on where my ambitions lie. Were I to sum up my hope for myself, writ large, what would it be? Very easily, I answered my own question that It is to make it easier for people to live in this world (, a world all too often sandpaper against our hearts).

Identifying this, writing it down as a pencil doodle, then inking it over and designing around it a full page of colour, it’s an easy and gentle guideline by which I am able to move through dunya. And it was perfectly timed, as all things are, because I do not believe that anything is a coincidence.

My roadmap? First, it’s seeing the dignity, and humanity of others [while in this particular case, recognizing that everyone makes mistakes, and ought to be given the chance to fix their errors (which can only be illustrated through changed behaviour, otherwise fuck off with your hollowed-words apologies)]. Second, it is to then mindfully create spaces of gentleness, safety, peace, trust, and non-judgmental love around myself, into which all others may step.

Here’s the always-kicker. I behave in this way even if the person before me refuses to engage me with this same level of respect, because *SAY IT WITH ME* the respect we extend to others is a reflection of the respect we carry for ourselves. (And it’s important to note that when it is in these poisoned spaces that I find myself, I don’t stick around. I pull a vanishing act, with a quickity-split BYEEEEEEEEEE, because I know that for me, existing in such spaces is the fastest way to harden this heart which I try to keep so soft and vulnerable and open to surprise. I wish to believe in good, and I will fight to believe in good, even when I want to douse this world in gasoline and light it the fuck up. Truth.)

Another truth? It’s not easy. Certainly not before I have my morning coffees. But it is doable. And it is necessary for me. Because my motivation cannot be what I take from others, but rather what I am able to offer them with a full heart.

Essentially, it is making certain that I am keeping the hearts of others as I wish for my own to be kept. I do it for both the most ethereal, and equally for the most selfish of reasons – ethereally, it is out of my love for Allah, and selfishly, it is because I am flooded with gratitude when I behave in this way. AlhamduliLah.

One thought on “The Ambitious Motivation”