The Architecture of Second Chances 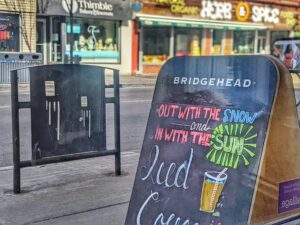 I’m not discussing small missteps rooted in the best of intentions, or coming from a place of love and landing heavily. As shitty as these moments are, they exist because we are human and we – every single one of us will at one point or another – make such mistakes. I’d be some kind of a self-righteous windbag if I didn’t offer the grace to others which I myself ask of them.

Rather, I’ve been talking with friends about the truly egregious errors of others, in order to sort whether second chances have any space in my world. The kind of first-time errors that are wilful, and intentionally harmful, selfish and flat-out built of a self-interest without any consideration for anyone but the actor. Maybe even worse – harm committed, with the full knowledge of the harm that is about to be inflicted, and a decision made that the harm about to be inflicted is ACCEPTABLE so long as the actor’s self-interest is met.

I write self-interest, but will interchange it with self-loathing, because (I think I will change the name of my site to): the respect we show others is a direct reflection of the respect we carry for ourselves.

Last I wrote, I mentioned that I’d come face-to-face recently with one such scenario.

They made their apology, and though I had forgiven them years ago on my own, it still needed to be made, and received. There is simply no way around it; when an apology is owed, I could give a shit if you must do so by carrier pigeon, or smoke signal – just get to it, no matter the years in a passage of time.

Since I’m trying to understand the architecture of second chances for me, I think the most secure of second chances would be first built on a foundation of active apology-making; meaning, the seeking out of me with the purpose of making the apology. Because most people would rather bury their heads in the sand than rightly eat shit for the kind of transgression I’m discussing, this isn’t the rule but the best case scenario. The rule, I think might fall a little more on the side of When someone has no choice but to make the apology, they do so in the correct way.

They do not I’m sorry you feel like, or I didn’t mean to, but they do (choose any of or all of the following) I made a major error in judgement. I was selfish. I did harm. I have nothing to offer you but this apology. I am sorry.

That’s the foundation, right there, should you wish for it to be. Because the one against whom the transgression was made is the one who decides whether the apology is to be received as closure or beginning. What we don’t generally discuss is that apologies don’t necessarily equal reconnection.

On this foundation, how then is the home for moving forward built, in the event that the decision is made to begin anew? It’s built by the repeated illustration of changed behaviour; slow, steady, and repeatedly proven changed behaviour. It’s not behaving differently once out of every ten actions, because that would be like randomly placing a two-by-four in a completely unnecessary spot, a column crooked, and stairs that lead to a wall. Instead, it must be mindful, considerate, and conscious choices made and then executed, one by one.

Foundation set. Main floor and walls built, with enough concrete poured to then build above, and maintain a roof. Apology, contrition, changed behaviour. And, as ever, time. Because time is where the pudding shows itself as proof.

As a woman constantly messing things up, and asking Allah for forgiveness; I don’t believe in cancel culture; and, I most certainly believe in reform. So, it doesn’t sit right that I wouldn’t also believe in second chances. But this belief cannot come blindly, and it most certainly cannot land me squarely in a space where I offer a previous offender a knife with my right hand, while my left points out the scar which I am asking be reopened.