For those who have lived here long enough, you remember him from the original post of 2008, because – oddly – I receive references about ‘the stand-up guy’ regularly from you. That we all have one, and so-and-so is yours and how do we go back to having that rightfully placed instinct to find these men as we get older…?

Some days back he sent me a message asking “What would you think of a large, white, non-Muslim man sporting a hat that reads salaam? Does that send positive vibes or is it just weird?”

I all-capped my response that he DO IT ASAP ASAP ASAP and then send me a photo of said doing.

So he did, with the intention of combating Islamophobia in a very loud, clear and direct way, while in-tandem showing his solidarity to Muslims.

Here is the large goof, forever one of my favourite people in the story of my life, with his Salaam (the Arabic word and script for ‘peace’) hat on: 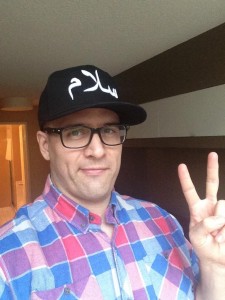 On the back of which is the English translation of the word on the front – Peace: 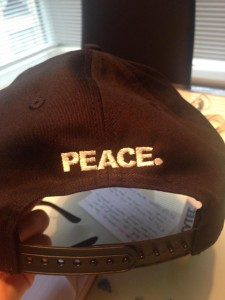 Via One Love, you too can make this same statement by buying your own hat and wearing it as proudly as him.