On Intuition: The Good, the Bad and the Ugly 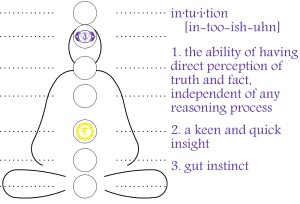 “The intuitive mind is a sacred gift and the rational mind is a faithful servant. We have created a society that honors the servant and has forgotten the gift.” -Albert Einstein

The Science
I have mentioned this before, very specifically my dreams and also my intuitions. Psychological studies continue to shed light on multiple forms of intelligence (find nine listed here) and also the Five Factor Model (coles notes here). The Mystics within Islam – the Sufis – understand that intuition is but one dimension in a world of infinite dimensions. Mystics of other great faith traditions, such as Shamans, would agree; in this Western world, we only very recently acknowledged and weighted into good human behaviour the concept of emotional intelligence, also known as not being an asshole when dealing with others. Within that same dimension are those who are beginning to place intuitive intelligence.

I am of the belief that eventually, even the most bizarre forms of intuition (such as those about which I write next) will be addressed scientifically. Take as example the concept of ‘evil eye’ – in recent scientific bits and bobs, confirmed was that when someone experiences envy, the composition of their frontal lobe changes, which then (are you ready for it?) emits something OUTWARDS. And I don’t mean like a unicorn. For those of you doubting, if you believe that (chemical) pheromones affect how we feel toward another person, why would you dismiss something such as this? (For the record: I am a Muslim broad who has no issue with science. For most Muslims, it is simple: science comes from God, so we have no fear of it. Big Bang Theory? Sure. Theory of evolution? Sure. Whose to say that the ‘missing link’ isn’t the moment Adam and Eve made their way on down? For most (thinking) Muslims, the world does not exist in binaries, but rather in layers where multiple truths may exist at once, leading back to a Truth. Another topic, another article…eventually.)

The Good
Over the course of the last near two years, I began to pay very close attention, and the moment I did was the moment that my dreams and (more heavily) my intuitions took a turn. There are certain individuals into whom I am entirely and completely tapped, all but one I have not yet met face-to-face. With the rest, I have shared secrets and pain and happiness and so the connection makes sense.

The one, she is Maria, written about in my dream article linked to above; recently in October, and in the same vein as my earlier dream about her, I was praying when I sensed something extremely clearly about her future. Within minutes of telling her, the feeling switched to something new – I knew that I had somehow, and for whatever reason, tapped into sharing a feeling that she was engaging. Equally interesting, I had, for some time before that moment, been receiving waves of challenge, difficulty and even sadness all specific to her.

The reason this is important? Because what I intuitively knew in October, is today a physical reality (that she is having baby number 2 in July. The detail to be confirmed is gender – I believe it is a girl).

I have yet to meet Maria or even hear her voice, but here she sits on the periphery of my intuition and dreams, a creature painted in the brightest hues with every one colour sharply contoured by black, everything received far more heightened than with anyone else (but for Blue; whom I will save for another article). I have absolutely neither logic nor reason to explain this, nor do I want to. All I know is that it is lovely, and that knowledge is enough.

The Bad
Not surprising, more often that not, the intuitions are not at all kind. When this is the case, I am often completely buried beneath the heaviness of when someone has given me half-truths, whole lies, or wishes me ill. Not surprising because consider the last time you heard someone say “Something about him just made my stomach turn so I bailed…” as opposed to “My gut told me to walk down the dark alley at 3am while I was drunk…” These are obvious examples, chosen to illustrate that when the Universe speaks to us, it is never with the intention to harm us, but rather to protect us.

Personally, this particularly intuitive clarity accompanies people, rather than drunken walks into dark corners (aka ‘Wednesday evenings’) and comes only when space is created between myself and the individual in question. In December, this overwhelmed me about two individuals in particular and I removed them as best I could from my life, without discussion. I am physically agitated by the knowledge that I didn’t take steps sooner, but I am really, truly, the performing monkey who believes that people will eventually default to good and I am continuously flattened when people default to anything but. (Do not misread this as though I always default to good, rather that my default position is not naturally Do Not Pass Go; stand on “Asshole”. Because. Because. BECAUSE. If someone actively corners or pushes me out of my default position, I zero in on and as violently as possible take a jackhammer to every open nerve I understand on that person. Violently, because I know just how far I have to be pushed to behave in this way. I am at my ugliest in these moments because having intuition about someone’s goodness comes with the flip knowledge about someone’s not-so-goodness, my own included.)

The liars, I do not confront. I’ve slowly accepted that people need to own their truth in their own time, and to force their hand any earlier is a recipe for disaster.

The Ugly
Finally, and only for purpose of placing a marker for this first ever experience. I have for the last few months known that someone will not live long enough to watch their children grow. That this person’s life, through illness, will be cut short. As I type this out, I have begun to shake because the feeling is equally terrifying as it is just so fucking sad. For obvious reasons, this is not something I would ever share with them (or anyone, in fact) so all I can do is place this marker here and hope that this time, I am a completely off-intuition crack-head. InshAllah.

12 thoughts on “On Intuition: The Good, the Bad and the Ugly”