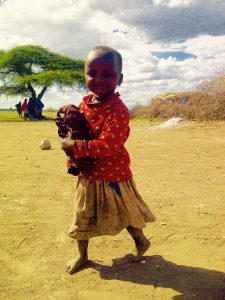 In her right arm, she had wrapped an empty plastic bottle and was carrying it around like a baby. I had met and fallen in love with this little Maasai girl when I found out that Maasai girls are married off at an extremely young (child’s) age, before which time most of them are ‘cut’, for purposes of purity and fidelity to their husband. I had sat crying in the car at the information, at a total loss, entirely impotent that I could not change her future with my own two hands. Six years ago, I think of her often and wonder if she has been married.

Some days later, 3am in the morning, we were sitting waiting for the sun to rise over Stone Town. Intense conversation over a table full of food and beverage and I shared my concerns with The Sailor. From South Africa, and with one of the sexier accents I’d heard, he very gently and simply nudged “But this is who they are. We should just love and accept them for who they are.”

I was absolutely dumbfounded. Also, this man goes to sea six to eight months a year, and what he does is read. In fact, all he does, it is read, and so his brain was as sexy as his accent.

Look. You know that I can be a basic b.tch, yea? But suddenly, I was someone with a (Brown) Saviour’s Complex (White SC was coined in 2012 by Teju Cole), before this term made itself run of the mill. I mean, Arthur didn’t call me this very thing, but between his words, it was clear. And it has sat with me ever since, not just about this particular situation but in general about the world.

That evening served as a poignant catalyst. Over the last handful of years, as I continuously try to shift my own positions and world-views from far more strict, rigid ones to a more understanding and gentle presence, I have found myself becoming far more vulnerable (odd this, as I have always been so very), more generous, and I think – just nicer.

I used to have such unbelievable and rigid positions on almost everything. And though I still harbour an extraordinarily high level of moral standards of behaviour for most all things, I have learned to create enough space within these standards for circumstance and experience. Basically, for another’s life lived, and a heart’s intention leaning to trying better. Even when we fall short, which we absolutely all do, I’ve learned to believe that we are at least trying to get things as right as possible – where we do a little less harm the next time.

Does this mean that some people don’t intentionally and willfully harm? Of course some do. But I would like to believe that they are not the rule, but rather the exception.

Sidebar: Naturally, this does not hold for either ideologically-driven individual violence, nor State-sponsored terrorism. Meaning, I do not believe that Kay-Kay-Kay members, for example, are doing the best they can. That noted, I would quite readily engage in a one-on-one (mobs, actual and virtual, like on Twitter, are a lost cause) dialogue, as I still have hope that maybe, just maybe, a person’s fear of ‘Other’ might be undone on a personal level, allowing them to then shift to elsewhere. Also, a situation such as rape. As a woman who believes in divine Justice, and no matter if someone is forgiven on this plane, I believe that such depth of violence will always (rightly) reap what it has sown in the next.

Back to the original subject matter – a really particular note, to which my girlfriends will attest is that when someone steps out of line where they are concerned, I immediately slip right back into my natural place of rest: wielding judgment like a machete (on their behalf). Then, with time, and often prompted by their healing, I soften.

Because I am not yet dead, and because I really do try to everyday improve myself just an nth of a degree more, I often struggle with this, and need to be reminded by my girls (JenniferMJ, Fatoomi, and Destine, thank you). For near three decades, I existed most comfortably inside of black and white lines, and so changing this person – no matter how committed to the change I continue to be – is no easy measure. Slowly, I continue to challenge myself at every turn, whenever I recognize that I am approaching a thing/person with my morality alone, without possibly accounting for their experiences. Slowly, I learn to express This might be yours, though it is not for me without judgement anywhere in my heart’s intentions. Slowly, slowly, slowly, I keep adding a stitch here and there to the fabric that holds and keeps both my heart and that of others. I believe that my friends would also stand behind this statement, when I provide them with the support and care they need.

And when I fail them, I trust that they love me enough to let me know.