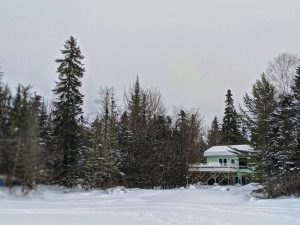 From Montreal, he and his girlfriend were on The Lake for two weeks in this corner mint-coloured cabin. I called him George Katsopolis, though his name was in fact Jeremy.

While I do six rounds (two, three times a day), he would be out once a day later in the afternoons, ambling along with quiet determination. His girlfriend, he explained, went out onto the lake once and was done with it.

In a bright orange jacket, George Katsopolis became a lovely and welcome fixture of our afternoons here. When in eye-sight, one of us would call out to the other GEORGE KATSOPOLIS IS ON THE LAKE.

(I made her call him George Katsopolis, too.)

Like me, he shared that he was worried about returning to the sounds of the city, because The Lake serves as such a removed dome of peace. I hope that George Katsopolis is reacclimating without much pain. Next I am in Montreal, I will be searching the streets for his orange jacket, face unmistakable, and reminding myself to call him by his real name, rather than the term of endearment I now carry in my chest. 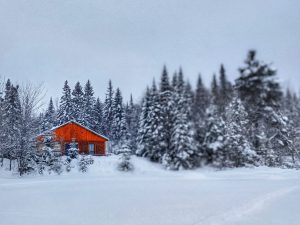 The owner of this proper cabin, my favourite home on The Lake, I named Thomas.

Once upon a time, a man named Thomas purchased this piece of land, forest-full. Slowly, between sunrise and right through until sunset, Thomas would carefully chop down each tree, removing the wood for first, the building of his home, and second, as bank for winter fires. It took him a full three seasons to complete the cabin, into which he moved during the fourth.

His first fire, he built to the quiet soundtrack of Cold Weather Blues, and warmed against it while finishing Rothfuss’ The Name of the Wind. Coming in for most weekends while still working, Thomas (who is widowed, and without children), plans to retire here.

This is my story, and I am sticking with it. Even though one time, in real life, not-Thomas emerged from his cabin in a flannel shirt and a beanie-hat to say hello. He was not what I expected. Which again, I am sticking to my story; and, I am now calling all such small and perfect appearing cabins, The Thomas.